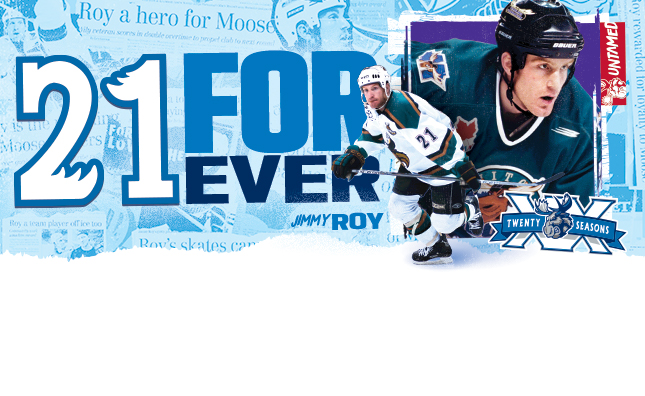 Roy spent all nine of his North American professional seasons with the Moose where he played in 603 regular season games, tallying 101 goals, 111 assists and 1,434 penalty minutes. Roy is the franchise leader in games played and penalty minutes, while he is ranked second in goals, shots on goals (1096), game-winning goals (17) and shorthanded goals (10). Roy and the Moose reached the post-season eight of his nine campaigns with Manitoba.

During the 2002-03 season, Roy won the Yanick Dupre Memorial Award as the AHL’s Man of the Year in recognition for his involvement in the community. In addition, Roy was selected to take part in the 2006 AHL All-Star Classic serving as captain for the Canadian AHL All-Star team. The forward also received numerous team awards throughout his decorated career. Roy was awarded Manitoba’s Most Popular Player in back-to-back seasons (2001-02 and 2002-03). He was also the recipient of the Moose Community Man of the Year award on three occasions (2001-02, 2002-03 and 2005-06).

Prior to signing with the Moose, the Sioux Lookout, Ont. native was drafted 254th overall by the Dallas Stars in the 1994 NHL Entry Draft. Roy spent the next two seasons at Michigan Tech where he collected 50 points (22G,18A) in 80 games. During the 1996-97 season, Roy played with the Canadian National Team where he recorded 27 points (10G, 17A) in 55 games.

Following his time in Manitoba, Roy travelled overseas to Germany in 2006. He spent five seasons playing for the Iserlohn Roosters of the Deutsche Eishockey Liga where Roy collected 96 points (48G, 48A) in 290 games. In 2011, Roy retired as a player to take on the role of Director of Player Development in the Winnipeg Jets organization, the position he currently holds.