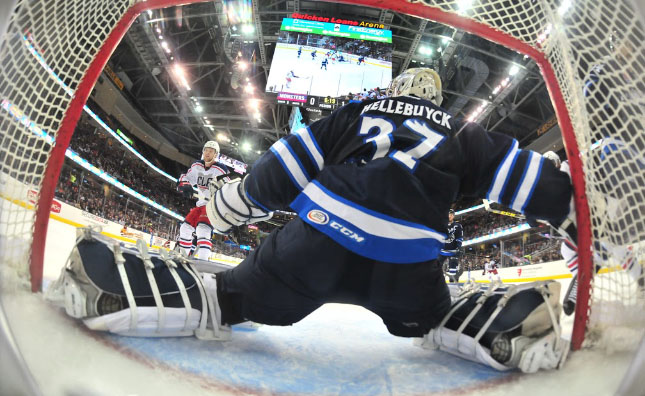 The Moose had a total team effort on Friday night to propel them to an impressive 4-0 victory over the Lake Erie Monsters at the Quicken Loans Arena.

Dan DeSalvo opened the scoring for the Moose just over six minutes into the game. DeSalvo now has a point (2G, 2A) in each of the four games he has played since joining Moose.

It was Brenden Kichton who scored for the Moose in the second period after a pass from Jimmy Lodge.

Kichton now has scored seven goals this season, the most of any Moose defenceman. He sits in a tie for 18th in scoring among all AHL defencemen while the assist was the first career point for Lodge.

In the third period, Lodge didn’t wait long for his second career point as he set up Darren Kramer for a goal with just under nine minutes to play.

Julian Melchiori, who was playing his first game since returning from the Winnipeg Jets, scored into an empty net with 2:31 remaining to seal the game for the Moose.

Goaltender Connor Hellebuyck was named the game’s first star as he was spectacular in a 36 save performance to earn his third shutout of the season with Manitoba.

The Moose have now shutout the Monsters in back-to-back games, the scores in both those games was 4-0. Manitoba has not allowed a Lake Erie goal in 122:27 of game time.

The two teams will meet again one last time in the regular season on Saturday night at the Quicken Loans Arena at 6 p.m. CT.