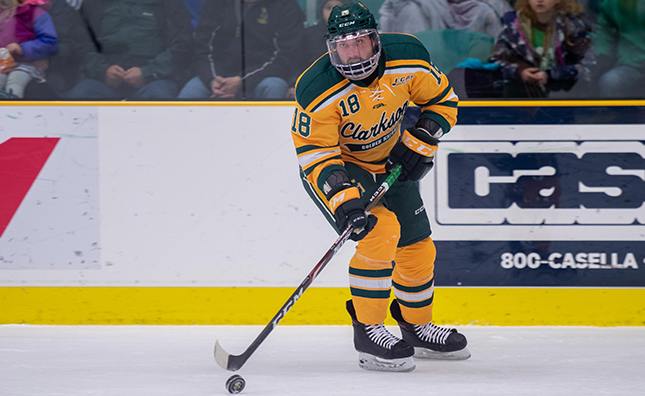 Egle, 23, posted 32 points (14G, 18A) in 32 games with the Clarkson University Golden Knights during the 2019-20 campaign. The Liepaja, Latvia product paced the Golden Knights in scoring this season and was named to the ECAC Third All-Star Team. Egle marked a career high of 40 points (19G, 21A) during the 2018-19 season and went on to win the 2019 ECAC Championship with Clarkson. The forward totalled 105 points (44G, 61A) in 135 career NCAA contests. Prior to his pro career, Egle spent three seasons in the USHL split between the Muskegon Lumberjacks, Madison Capitols and Chicago Steel. He posted 88 points (29G, 59A) in 144 career USHL games. Egle attended Winnipeg Jets Development Camp in 2019.

Shaw, 23, has appeared in nine games for the Moose this season. The Woodbury, Minn. product also posted 13 points (4G, 9A) in 31 games for the Jacksonville Icemen during the 2019-20 campaign. Shaw made his professional debut at the end of the 2018-19 season when he recorded one assist in nine games with Jacksonville. Prior to turning pro, Shaw spent four seasons with the University of North Dakota Fighting Hawks. The defenceman was named to the NCHC Academic All-Conference Team for three consecutive years. Shaw collected 37 points (10G, 27A) in 137 career NCAA games. While at North Dakota, he captured the 2016 NCAA National Championship alongside Winnipeg Jets defenceman Tucker Poolman.