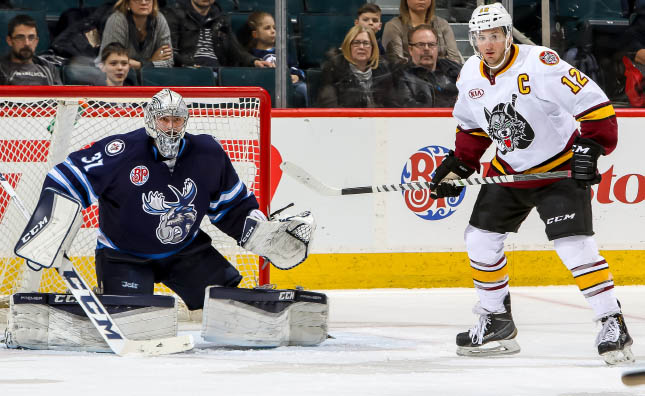 The Moose played yet another tough match against their long-time rivals the Chicago Wolves on Sunday afternoon at the MTS Centre.

It was a physical battle much like game one of the series the previous day and both teams were facing each other for the eighth and final time this season.

The Moose held a 2-1 lead through 40 minutes after first period goals from Josh Morrissey, who scored his fourth of the season, and Matt Halischuk who had his fifth.

Manitoba came out strong in the third period and were able to capitalize on their chances.

First it was Austen Brassard who scored on a strong wrist shot for this 10th of the season.

He was followed just 53 seconds later by Nic Petan who scored his eighth off a great pass from Scott Kosmachuk.

Jiri Fronk then added an extra insurance marker late with his sixth of the season to help the Moose to a 5-2 victory.

Josh Morrissey had a career high four point game as he factored in on four of the five Moose goals with a goal and three assists on the afternoon. He was named the game’s first star.

Connor Hellebuyck played his first game with the Moose since being re-assigned by the Winnipeg Jets on Friday. In his first AHL start since Nov. 20, Hellebuyck was solid making 39 saves and was named the game’s second star as the Moose were outshot 41-24.

The Moose begin a five game road trip this Wednesday when they play the Rockford IceHogs for the first time this season. Note the start time of 10:30 a.m. CT.

You can listen to the game live at MooseHockey.com/listenlive or on TSN 1290.