A Conversation With the Women of the Manitoba Moose

In recognition of Gender Equality Month, the women behind the Manitoba Moose discussed their roles with the club and personal experience working in the sports industry with Global News Winnipeg Reporter Kahla Evans.

One of the many encouraging dynamics about this group of women is the diversity of positions they hold. Each works under a major pillar of a sports organization. This panel demonstrated the progress gained for women dedicated to working in sports. The fierce passion they hold for their work and determination to make the industry better for women is a contributing factor in their success in their respective roles. 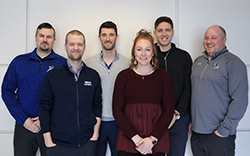 Gallant spoke highly of how fan engagement is a key experience that drives her work in ticket sales.

“The job itself is very rewarding in selling entertainment,” said Gallant. “I find the passion and the excitement of being able to share a memory with someone who would like to attend a Moose game, whether they are a hockey fan or they are not. It’s something that’s really exciting, when you’re at games and you get to interact with fans. It’s like no other environment.”

There’s no question the roles these women hold is impactful. Not only within the sports industry but also, as displayed by Payne, impactful in the community. 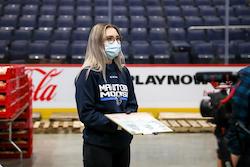 “We work with a lot of really great community groups,” said Payne. “Whether it’s Siloam Mission when we’re doing our community breakfast and we get to meet the recipients of our clothing drive. Or Autism Awareness when we get to do some meet and greets with the children of St.Amant (autism early learning classes). You hear from people who are directly affected and it’s just a really great feeling to know that. Yeah we’re involved, but all the gratitude is to our fans who just year after year are continuously supportive.”

Although the industry has come a long way in embracing women in front office roles, there’s still work to be done. Evans asked me to describe the challenges I’ve had to overcome of working in a male dominated industry.

I detailed one of the many hurtles that comes with being a woman in the sports industry. The self-pressure to be perfect. I realized very early in my career the price of perfection, or at least the appearance of it, is not only exhausting but impossible to achieve. Making a mistake felt as though it was not only reflective of my own work, but that of the other women around me working tirelessly in their roles. Bearing the weight of how the industry views women in sports is not a light load to carry. 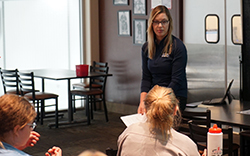 Needless to say, I had to re-evaluate my expectations and exercise self-compassion. Each woman’s journey in the industry is her own and I realized it would be an injustice to our work to hold on to a mistake and ignore the many victories. Yes, there is a sense of responsibility that comes with working as a woman in the industry, but also a sense of pride that no small mistake can take away.

The group also discussed that the notion you need to have played the sport to work in the game is fabricated. If you weren’t a player, that doesn’t mean you aren’t deserving of your role. Gallant touched on the misguided perception.

“Just because you don’t play the sport, there’s definitely still a spot on the bench for you,” said Gallant. “It does come down to your interest and motivation within that role that you take on.”

“Don’t be intimated,” added Chipman. “Sometimes guys can put across the energy that maybe if you don’t know all the stats or you can’t name every player then maybe you don’t belong, but that’s absolutely not the case.”

Speaking for myself, imposter syndrome is not only present, but a daily hurtle I still practice on overcoming. Payne said it best on how to work through your doubts.

“Be confident in that you were hired for a reason and you were brought on for a reason,” said Payne. “You know what you are capable of. Really the only person that kind of suffers when you are lacking that confidence is yourself.”

The panel gave me hope for the future because of the underlying theme of our conversation; the importance of celebrating, supporting and lifting up the women around us. I am here because of the women who came before me and paved the way. I strive to do the same for the women proceeding me with the hope that their journey in sports is a little easier.