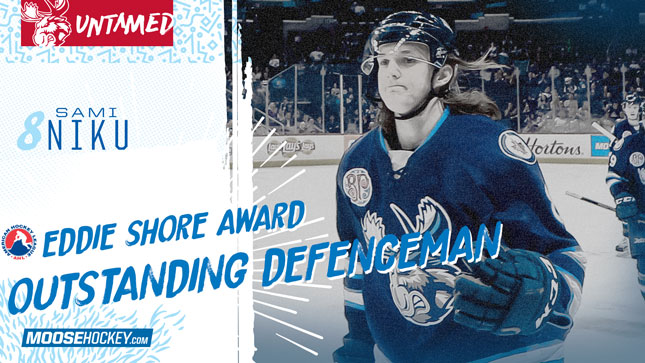 Niku, 21, is just the second rookie, and first Moose defender, in the 60-year history of the Eddie Shore Award to win the honour.  Heading into the final week of the regular season, Niku sits second among AHL defencemen and tied for third among all rookies with 53 points (16G, 37A) and owns a plus-19 rating in 73 games for the Moose.  Niku’s plus/minus rating is the best among the top-six scoring defencemen in the league.  A seventh round pick, 198th overall, of the Winnipeg Jets in 2015, Niku now owns the Moose franchise record for points by a rookie defenceman, and has the fifth-most points by a Manitoba defender in a single campaign.  Niku made his NHL debut with Winnipeg this season, on April 3, scoring a goal as the Jets claimed a 5-4 overtime victory.

It’s been a busy awards season for Niku who was previously named Manitoba’s best defenceman and co-rookie of the year.  He’s also been recognized by the league as a 2017-18 First Team AHL All-Star and named to the AHL All-Rookie Team.

This award was first presented by the AHL in 1958-59 in honor of the late Eddie Shore, a member of both the Hockey Hall of Fame and the American Hockey League Hall of Fame who is widely regarded as one of hockey’s greatest defencemen. Shore won a total of seven Calder Cups in his career, including two as the general manager of the Buffalo Bisons and five as the longtime owner of the Springfield Indians.

The Moose head out on the road for three games this week starting in Cleveland on Thursday.  Tune into the action on TSN 1290 and moosehockey.com/listenlive starting at 5:45 p.m.

Tickets for Moose home games in the 2018 Calder Cup Playoffs are on sale now, and are available at moosehockey.com/tickets.