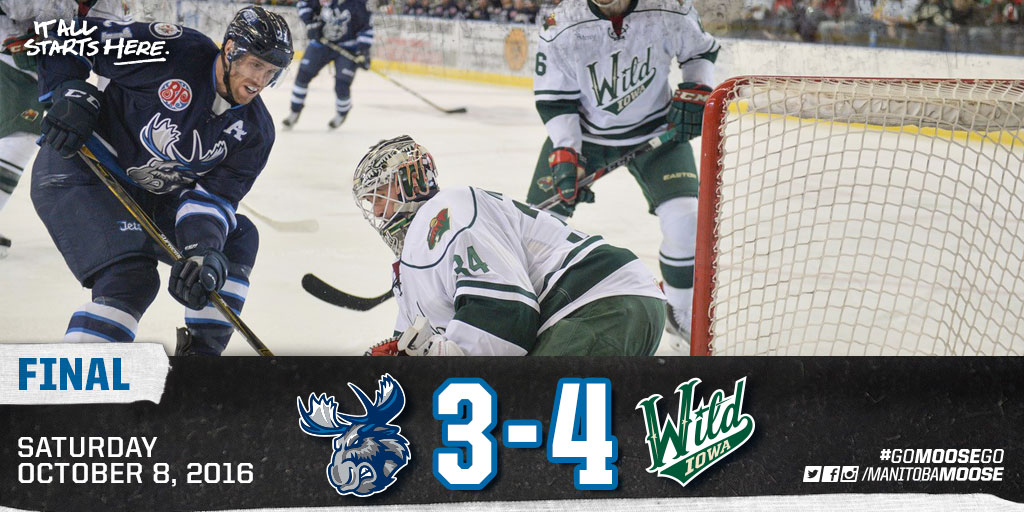 Game Story
The Manitoba Moose (0-1-0) and Iowa Wild (1-0-0) opened their pre-season set in Fargo, ND at Scheels Arena on Saturday night.  The Wild went on the attack early in the contest applying plenty of pressure in the Moose end.  Jamie Phillips stood tall for Manitoba, making seven stops over the first seven minutes.  The Moose pushed back in the second half of the period, but couldn’t find a way around Steve Michalek who made five saves.

The second period saw the deadlock break at the 12:06 mark.  With Darren Kramer in the box on a high-sticking double minor, Colton Beck shoveled a rebound into the top of the net to give Iowa the 1-0 advantage.  Just 1:15 later, Alex Petan added to the Wild lead on another scramble in front of Phillips.  The Moose goaltender turned away 15 shots in his first forty minutes of action.  Manitoba had a pair of powerplay opportunities in the period, but couldn’t cash in on the chances, trailing 2-0 into the third.

The final period saw the Moose get off to a hot start.  Scott Kosmachuk got Manitoba on the board when he fired a Jack Roslovic drop pass behind Michalek just past the four minute mark.  50 seconds later, Jimmy Lodge evened the scoreboard at 2-2 when he found some space and fired the puck to the back of the net. The Wild responded quickly when Alex Tuch snapped in his own rebound on the powerplay at 6:15 of the frame.  Iowa restored the two goal lead when Jack Nevins grabbed the puck off a faceoff in the Moose zone and was able to walk it around Phillips.  The Moose pulled back within one when Axel Blomqvist fed Lodge in the slot for a one-timer and his second of the frame.  Manitoba put together a late push, but couldn’t find a tying goal as the Moose fell 4-3 to the Wild in their pre-season opener.

The Moose and Wild head north to Grand Forks where the Moose put the wraps on their pre-season schedule.  Puck drop is slated for 2 p.m. CT at the Ralph Engelstad Arena.  Tune into the game online at moosehockey.com/listenlive live starting at 1:45 p.m. CT.