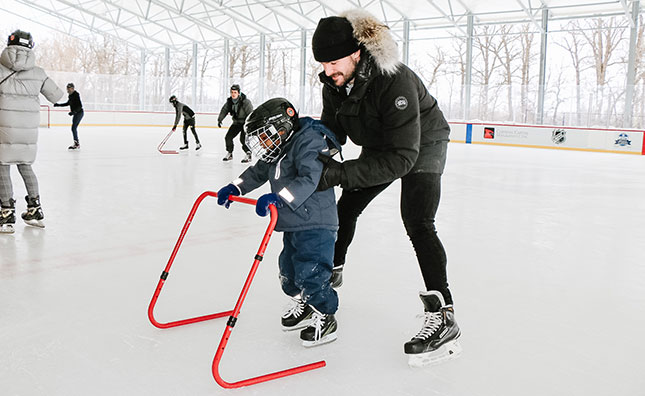 The Manitoba Moose Hockey Club is proud to announce Jimmy Oligny has been named the team’s winner of the IOA/American Specialty AHL Man of the Year award for his outstanding contributions to the Winnipeg community during the 2019-20 season.

Oligny, 26, is in his sixth AHL season, split between the Milwaukee Admirals, Chicago Wolves and now Manitoba Moose. The St-Michel, Que. native is enjoying a career season on the ice with 16 points (4G, 12A) in 53 games and has been prominent in the community ever since joining the organization.

“Yeah it’s pretty cool. It’s not something that, when you go into the community it’s not something you’re looking for. You’re not doing it thinking you’re that going to get that award at the end of the year,” Oligny told MooseTV’s Austin Siragusa. “It’s nice to get a little recognition for it because some guys put a lot of effort into it and it’s really important for them to get in the community. So it’s a nice award, for sure.” 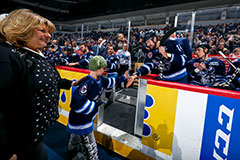 Recently Oligny was involved with a ‘Welcome to Winnipeg‘ skate (Feb. 8), introducing skating and hockey to newcomers to Canada. The father of three has been involved in a number of meet and greets with fans (Dec. 7, Jan. 18, Feb. 6) through the club’s Hockey Fights Cancer initiatives and in support of the True North Youth Foundation (TNYF). His support of the TNYF extended to a skate with fans at the foundation’s Camp Manitou as part of the organization’s fundraising efforts. Oligny has also been involved with the TNYF’s Project 11 by helping to record video messages in both English and French for the initiative, which focuses on mental health awareness in youth.

Oligny has been a regular participant in team community functions.  During a busy month of October, Oligny and a group of Moose visited 17-Wing at CFB Winnipeg to learn about some of the training the members of the Royal Canadian Air Force experience, and operations running out of the base. A few days later, the team made their annual visit to Assiniboine Park Zoo to spend an afternoon with fans. To round out the month, Oligny and his teammates joined up with the Winnipeg Jets to host the annual Jets Gala in support of the TNYF. 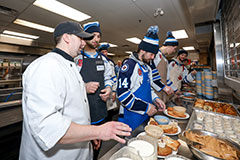 In January, Oligny and the Moose stopped by Siloam Mission to prepare and serve breakfast for over 400 patrons. The team also dispersed to schools across Winnipeg and the surrounding area to promote literacy as part of their Stick to Reading initiative in February. The defenceman has also been involved in post-game autograph sessions throughout the season.

Oligny was previously named the Milwaukee Admirals’ IOA/American Specialty Man of the Year for the 2015-16 season.

Oligny is now one of 31 finalists for the AHL’s 2019-20 Yanick Dupre Memorial Award, honouring the overall IOA/American Specialty AHL Man of the Year. The league award is named after the former Hershey Bears forward and AHL All-Star who died in 1997 following a 16-month battle with leukemia. The winner of the Yanick Dupre Memorial Award will be announced by the American Hockey League at a later date.