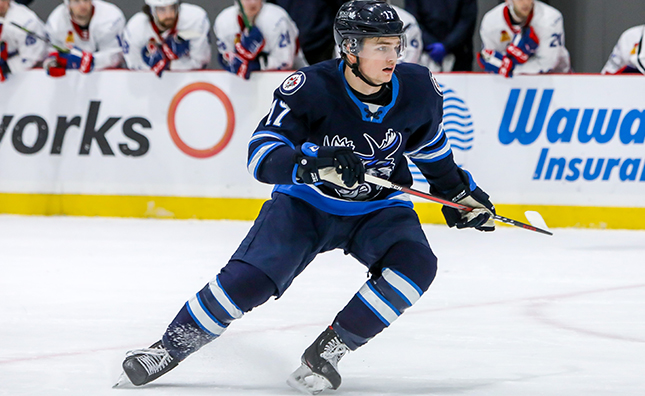 The Winnipeg Jets, in conjunction with Hockey Canada, announced today that forward Cole Perfetti will join Canada’s men’s national team for the 2021 IIHF World Championship that starts later this month in Riga, Latvia.

Perfetti, 19, has posted 26 points (9G, 17A) in 32 games for the Manitoba Moose during the 2o2o-21 season. The Whitby, Ont. product is ranked sixth among AHL rookie scoring leaders and second on the Moose points and assists. During his first professional season, Perfetti was a key contributor on Manitoba’s power play as he tied for the lead on the Moose with six tallies registered on a man advantage and paced the club with nine power play assists.

Perfetti was recognized by the AHL as the CCM/AHL Rookie of the Month in April, making him the first Moose forward to receive the honour. Perfetti tied for the lead among AHL rookies, and led the Moose, in scoring in April. He recorded 13 points (4G, 9A) in just nine games. Perfetti’s 13 points also left him in a tie for seventh among the league’s top point-getters for the month. His plus-eight rating tied for the lead among rookies and was tied for ninth overall. Also notable during the month of April, Perfetti recorded a seven-game point streak (4G, 9A) lasting from April 8/21 through April 27/21. During this streak, Perfetti marked a multi-point performance on four occasions, two of which were three-point games.

Prior to joining the Moose, Perfetti represented Canada at the 2021 IIHF World Junior Championships and won a silver medal after posting six points (2G, 4A) in seven games.

Perfetti was originally drafted by the Jets in the first round (10th overall) in the 2020 NHL Draft.

The Moose face off against the Belleville Senators on Friday, May 14. Puck drop is scheduled for 6 p.m. CT. The game is available on MooseHockey.com/LISTENLIVE, CJOB.com/sports and AHLTV.com.