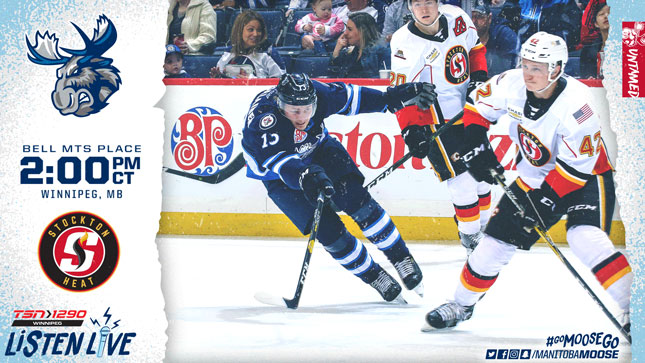 The Manitoba Moose (37-28-5-2) are fighting for a spot in the playoffs in today’s rematch with the Stockton Heat (29-29-4-2) at Bell MTS Place. It’s the final home game of the regular season for the Moose which means it’s also Fan Appreciation Day. Today’s action will be punctuated with hundreds of prizes, giveaways and more. Puck drop is at 2 p.m. CT with limited tickets still available at moosehockey.com/tickets.

Manitoba enters today’s game sitting in fourth place in the Central Division and will make up their game-in-hand on the rest of the teams in the race for the final two Central playoff spots Sunday. With a win, the Moose will move into third place in the division as well as set a new franchise record for home wins in a season. Manitoba is 25-10-1-1 at Bell MTS Place in 2018-19.

The goaltenders stole the show in Saturday’s meeting. Stockton’s Jon Gillies made 30 saves in the loss while Manitoba’s Mikhail Berdin stopped 26 for his second career AHL shutout.

Ryan White, who led the Moose in shots on Saturday, spoke about how the team draws energy from their talented netminder.

“Everyone sees the puck movement, the way he competes and the way he makes saves, but we see the love and joy he has for the game every day. I think that just breeds confidence through the team. When you have a guy that wants to come in there and play hard every night, even though he’s the goalie, it really goes through the lineup.”

Today’s game will be Berdin’s eighth consecutive start with a 5-1-1 record and a 0.942 save percentage through those games.

“We’ve won quite a few one-goal games and we feel quite confident with that part of the game. There’s a belief system in what we do,” Head Coach Pascal Vincent said after Saturday’s game. “I really enjoyed, tonight, the way we were still pressuring the puck, even though it was a one-goal game in the last five minutes of the game.”

The Moose have shown an ability to shut down games in the third period throughout the campaign. After yesterday’s win over the Heat, Manitoba are 29-3-3-2 when leading after two periods.

White said the team’s focus on details from start-to-finish will need be strong again today if the Moose are going to sweep Stockton.

“I thought we did a good job managing the pucks, and I think we need to do that again tomorrow. Just make sure we’re playing a playoff game. Doesn’t matter if they’re not in [the playoffs], we’ve got to play the same way.”

Today’s game will be broadcast on TSN 1290, moosehockey.com/listenlive/, the Moose App, and streamed live on AHLTV. Manitoba wraps up the season on the road with three games against the Griffins and Wolves next weekend starting Friday night in Grand Rapids.