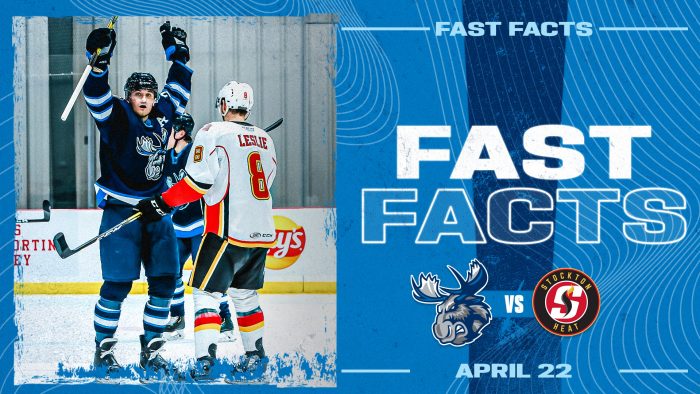 The Moose return to game action this evening, welcoming the Stockton Heat to Bell MTS Iceplex. The teams’ previous series saw the clubs battle to four games decided by two or less goals. Manitoba comes in riding a three-game winning streak while Stockton has dropped three in a row. Listen to tonight’s game on cjob.com/sports and MooseHockey.com/LISTENLIVE or watch with a subscription to AHLTV.

The Winnipeg Jets announced today the team reassigned forwards Joona Luoto and Dominic Toninato, along with defenceman Nelson Nogier, to the Moose. Luoto is the only player of the trio to partake in a game this season, tallying three points (2G, 1A) in six games with the Moose. Nogier has played his entire 205-game AHL career with the Moose, posting 32 points (4G, 28A) with the franchise. Toninato was an off-season signing by the Jets. The former captain at the University of Minnesota-Duluth has 49 points (26G, 23A) in 103 AHL games and 14 points (5G, 9A) in 85 NHL games. Forward C.J. Suess and defenceman Luke Green were reassigned to the Jets Taxi Squad.

Nathan Todd recorded an AHL career high three assists during Monday’s 5-1 victory against the Senators. The contest marked Todd’s first career AHL multi-assist contest. The Ottawa, Ont. product is the first Moose player during the 2020-21 season to post three assists during a game. The centreman also paces the club with four multi-point games on the season.

Forward Cole Maier is a consistent fixture on the statsheet with a four-game point streak. His active point streak has lasted from April 7 to April 12 where he recorded five points (1G, 4A) in four contests against the Belleville Senators. The centreman has found success against the Senators this season with seven of his nine points coming against the club. The Pequannock, N.J. product recorded his first career AHL multi-goal game against Belleville on March 3.

Bobby Lynch scored the game-winning goal during Monday’s contest against the Belleville Senators. Lynch is now currently tied for the lead on the Moose with two game-winners on the season. The Grand Blanc, Mich. product marked his first game-winning goal against the Toronto Marlies, Feb. 19. His tally was recorded to extend his point streak to four games, marking the longest streak of his AHL career. The forward recorded four points during his season-opening streak (2G, 2A)

It can be unheralded AHL contract signings provide just as large of an impact for a team as an NHL drafted player. This season that is brilliantly exemplified by forwards Nathan Todd and Jeff Malott. Malott is the only undrafted player among the top-20 rookie goal-scorers and one of just four among the top-20 rookie point producers. Meanwhile, Todd leads the Moose in scoring with 20 points (8G, 12A) in 24 games. Players not selected in the NHL Draft have been critical to Manitoba’s offence this season. Of the 72 goals scored by the Moose so far this season a total of 41 were scored by players who weren’t picked during the NHL draft.

Jeff Malott recorded two points (1G, 1A) during Manitoba’s 5-1 victory against the Belleville Senators, April 12. The contest marked Malott’s third career AHL multi-point contest. The Burlington, Ont. product is currently on a three-game point streak lasting from April 8 to April where he has posted five points (3G, 2A) during that span.