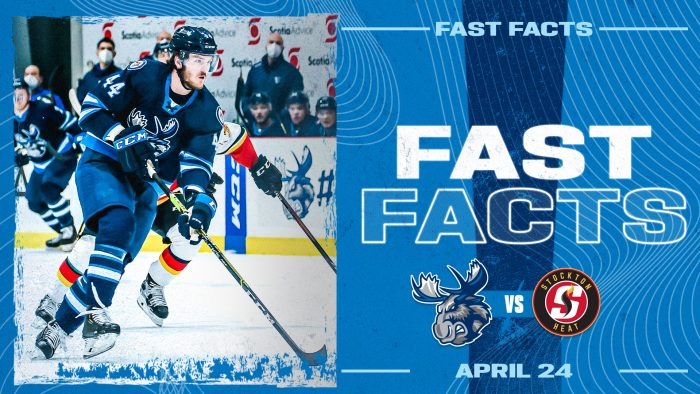 The Moose and Heat clash in an early matinee matchup this afternoon at Bell MTS Iceplex. Manitoba struck first in the five-game series with a 5-2 victory on Thursday. It was the home-side’s fourth consecutive win and second in a row over Stockton. Listen to the action on cjob.com/sports and MooseHockey.com/LISTENLIVE or watch with a subscription to AHLTV.

Dylan Samberg and David Gustafsson returned to Manitoba’s lineup on Thursday after both being sidelined for four games due to injury. Both players found the statsheet and made an impact for the Moose in their return. David Gustafsson scored the game-winning goal for Manitoba at 1:25 of the second period and added a secondary assist Kristian Reichel’s power play goal. Samberg recorded two assists during the contest, including the primary helper on Gustafsson’s game-winner. In recording two assists, Samberg marked his first AHL career multi-point performance.

On the Plus Side

Johnathan Kovacevic recorded a goal and an assist during Thursday’s contest. The defenceman finished the game with an AHL game-high plus-four rating. Kovacevic currently paces the Moose with a plus-seven rating during the month of April. The Grimsby, Ont. has recorded eight points (1G, 7A) in 23 games this season and is currently rolling on a two-game point streak (1G, 2A).

The Winnipeg Jets announced on Friday the club reassigned goaltender Eric Comrie from the Taxi Squad to the Manitoba Moose. Netminder Mikhail Berdin switched places with Comrie and reassigned to the Taxi Squad. Comrie appeared in one game for the Moose this season where he made 19 saves on 21 shots and led the Moose to a 4-2 win over the Stockton Heat. Comrie posted a 2.00 goals-against average alongside a .905 save percentage during the contest. In earning the victory, Comrie recorded his 84th victory with Manitoba, tying Cory Schneider for the franchise lead.

Nathan Todd recorded three assists during Thursday’s contest against the Stockton Heat. The centreman has posted three helpers in back-to-back games and stands as the only Moose player to record three assists during a contest for the Moose this season. Five of Todd’s six helpers during the last two games have been the primary assist.