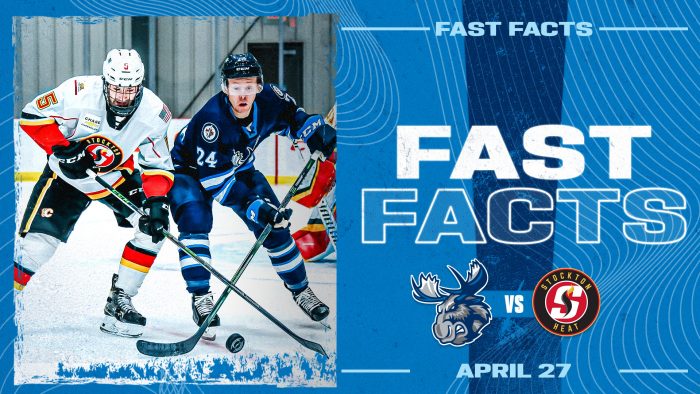 All good things must come to an end and that held true yesterday as the Moose saw their five-game winning streak snapped. The Heat grabbed a 3-2 shootout win in the matinee affair to drive away a five-game losing skid. Manitoba looks for a bounce-back game against Stockton this evening as the teams clash again at Bell MTS Iceplex. Coverage of the game begins at 5:45 p.m. CT on cjob.com/sports and MooseHockey.com/LISTENLIVE. You can also watch with a subscription to AHLTV. Puck drop is 6 p.m. CT.

Forward Cole Maier is on the most productive run of his professional career. Maier recorded a point in all but one of his last seven games. During that stretch, the Pequannock, N.J. product has seven points (2G, 5A), which is tied for third-most on the Moose since April 7. Maier put together a career-high four-game point streak from April 7-12 before having it snapped in the series opener against the Heat. Overall, Maier has 11 points (6G, 5A) in 22 games, just one goal and four points back of his 59-game total during his rookie season in 2019-20.

The Winnipeg Jets Taxi Squad had considerable impact on the previous two games. Dominic Toninato scored two goals on Saturday during his brief stint with the Moose before returning to the Jets on Monday. The forward returned to the Moose just as quick, being reassigned to the club this morning. Monday’s game saw Ville Heinola, Joona Luoto and Nelson Nogier all pick up assists for Manitoba after being reassigned to the AHL earlier in the week. In net, Eric Comrie stopped 38 of the 40 shots he faced in two games since joining Manitoba.

Defenceman Noah King made his debut in antlers yesterday afternoon. The Winnipeg, Man. product was acquired by Manitoba on loan from the Heat at the AHL Loan/Trade Deadline on April 19. Playing in just his second professional game, King recorded two shots on goal and was an even plus/minus rating.

Joona Luoto picked up his second assist of the season after a great effort to set up an eventual Cole Maier tally yesterday. It was Luoto’s first point since returning to the Moose from the Winnipeg Jets Taxi Squad ahead of the current series against Stockton. Luoto has four points (2G, 2A) in nine games to match his 18-game total from his rookie season in 2019-20.