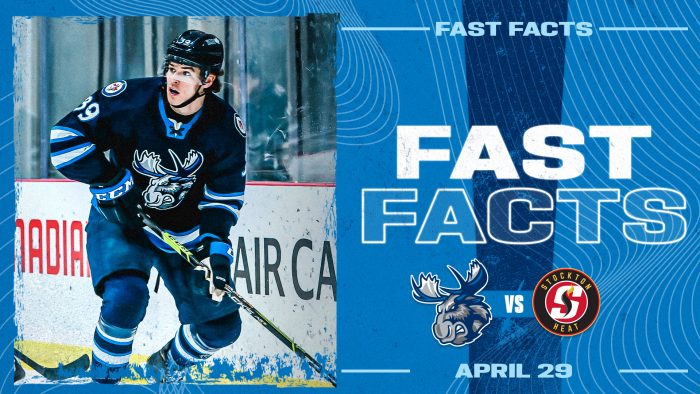 After a month and a half at Bell MTS Iceplex, the longest home-stand in franchise history comes to a close this evening. The Moose look to extend their point streak to eight games when they face off against the Stockton Heat. Listen to the game on cjob.com/sports and MooseHockey.com/LISTENLIVE or watch with a subscription to AHLTV.

Johnathan Kovacevic recorded two points (1G, 1A) during Manitoba’s 3-1 victory against the Heat on Tuesday night. The defenceman marked his third multi-point game in the last seven outings. In recording an assist on Tuesday, Kovacevic tied his AHL season-high assist total of eight, which he previously recorded during the 2019-20 season. The defenceman reached his feat in 19 less games.

Final Lap of the Marathon

With tonight’s contest against Stockton, the Moose conclude their 17-game home stand. Manitoba recorded a 8-5-2-1 mark through 16-straight contests. Jeff Malott leads Manitoba with seven goals over the duration of the current home stand. Cole Perfetti paces the Moose with 17 points (6G, 11A) in 16 games. The centreman found the scoresheet in all but five of the 16 games. Perfetti enters tonight’s contest in the midst of a seven-game point streak (4G, 9A). Perfetti, Malott, Nathan Todd, Johnathan Kovacevic and Cole Maier stand as the Moose players who appeared in all 16 tilts of the home stand.

Stockton outshot the Moose 33-27 during Tuesday’s contest despite the Moose coming out with the win. Manitoba hadn’t been outshot since March 25/21 against the Laval Rocket. The last time the Moose lost when being outshot was March 1/21 against the Toronto Marlies. Manitoba’s leading scorer Nathan Todd paces the Moose with 86 shots on the season. Jeff Malott paces Manitoba’s current roster with a 23.5 shooting percentage recording 12 goals on 51 shots.

The Winnipeg Jets announced on Wednesday that Eric Comrie, Ville Heinola, Marko Dano, David Gustafsson and Dominic Toninato had been reassigned from the Moose to the Taxi Squad. The Jets also announced that Mikhail Berdin will be rejoining the Moose. The recalled players made an impact during their time in antlers. Dominic Toninato posted three goals in three games for the Moose and recorded his three tallies on only seven shots. Eric Comrie marked a 2-0-1 recorded during his most recent three-game stint with Manitoba. Comrie posted a shutout on Saturday against the Heat collecting his 85th victory for the Moose. This feat advanced the netminder into sole possession of the franchise lead in wins. Gustafsson was returned to Manitoba this afternoon.

Cole Perfetti recorded the primary assist on Dominic Toninato’s game-winning goal during Tuesday’s contest against the Heat. Perfetti extended his active point streak to seven games (4G, 9A). The centreman is currently tied for fourth among longest active streak holders, ranking second in terms of points accumulated during the streak.