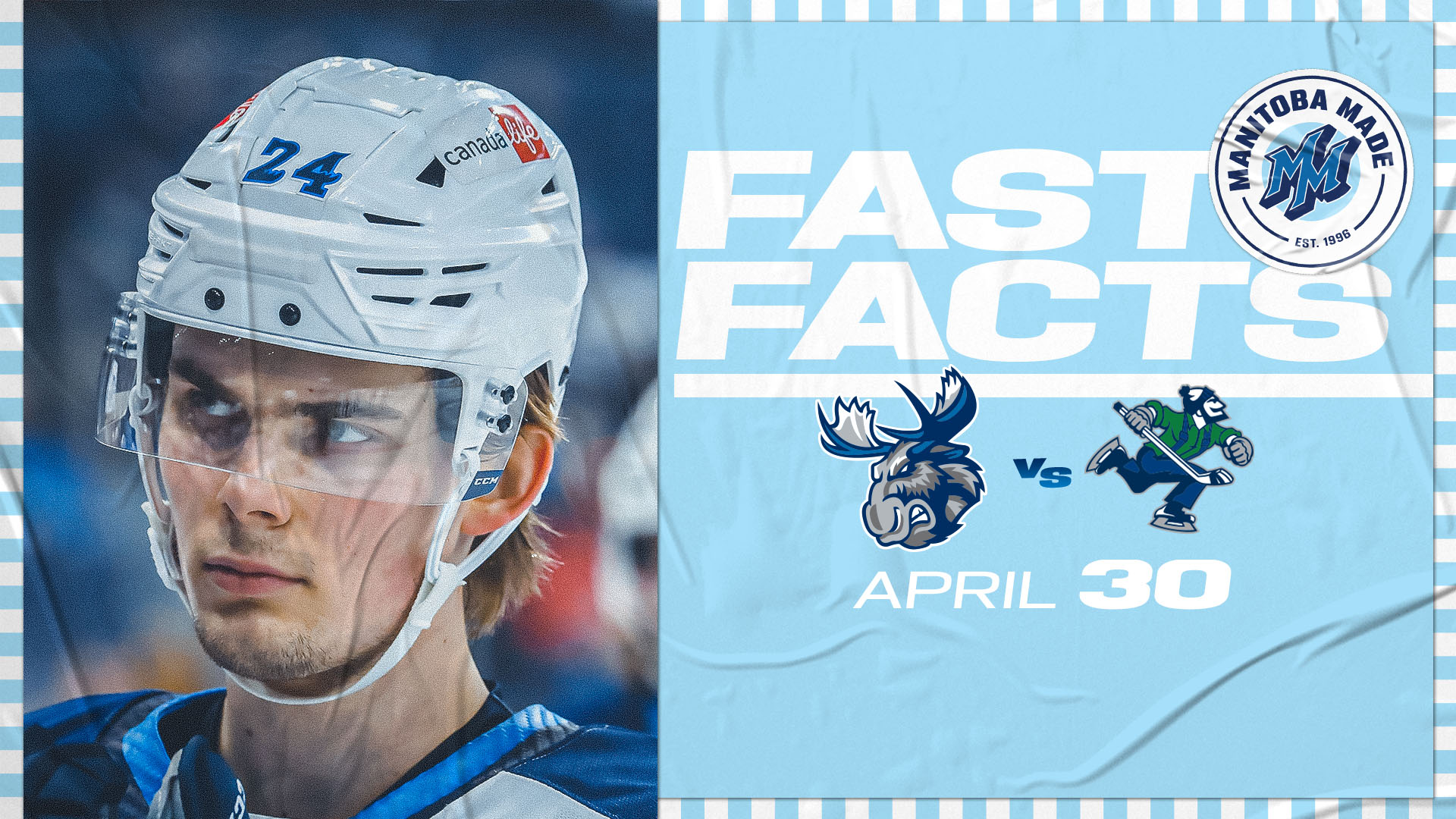 The Moose and Canucks clash today at Canada Life Centre as the teams put the wraps on the 2021-22 regular season. The Moose got the two-game set off to an emphatic start with a 7-1 victory over Abbotsford for Manitoba’s 40th win of the season. Today is Military Appreciation Day and the Moose will sport specialty jerseys honouring the Winnipeg-based 402 Squadron. Tickets for today’s 2 p.m. CT game are available at MooseHockey.com/TICKETS. Coverage of today’s contest on CJOB.com/sports, AHLTV and the Manitoba Moose App gets going at 1:45 p.m. CT.

The 2021-22 edition of the Moose can etch their squad into the franchise record book with a win today. Manitoba currently stands with 24 wins at Canada Life Centre. Their 25th win of the season would match the 2006-07 and 2008-9 groups which reached the mark in 40 homes games, compared to 36 this season. Regardless of if they reach that 25th win, the 2021-22 group has already clinched the best points percentage on home ice in franchise history. The minimum points percentage the Moose can post is .694 and with a win they can clear .700 for the first time in franchise history. The Moose rank fifth in the AHL with a .714 points percentage at home with a 24-9-0-2 record.

You Never Suess to Amaze

C.J. Suess scored twice in Manitoba’s 7-1 home victory over Abbotsford on Thursday night. With the pair of tallies, Suess has now equaled his career high of 14, which was set during the 2019-20 season with Manitoba. The forward has registered 28 points (14G, 14A) in 46 games this season and has tallied nine points (6G, 3A) over his past 10 games.  Suess has five goals in his past three games, with four coming at even strenghth and one shorthanded. The Forest Lake, Minn. is tied for second on the Moose with three-game winning goals this season.

Declan Chisholm recorded  two points (1G, 1A) in Manitoba’s Thursday night win over Abbotsford. The second-year defenceman is now up to 30 points (9G, 21A) on the season and currently sits on a three-way tie for sixth place in team scoring. Chisholm ranks second among Manitoba defenders. The Bowmanville, Ont. product has 21 points (7G, 14A) at home, accounting for 70 percent of his production. The defenceman also has a sparkling plus-14 rating at home, which is second only to his defence partner Leon Gawanke’s plus-15 rating. If Chisholm is able to score his 10th goal of the season today, the Moose will be the first team since the 2007-08 Chicago Wolves with three defencemen into double-digits.

Nicholas Jones finished Thursday’s win with two points (1G, 1A). Both the goal and the assist came in the first period which helped the Moose set the tone for the rest of the contest. Jones is in the midst of a career season and has recorded 31 points (11G, 20A) through 59 games. The forward has 10 points (3G, 7A) over his past 10 contests and with the two points in Thursday’s win, becomes the eighth Moose skater to eclipse the 30-point mark on the campaign. Jones sits fifth in Moose scoring this season.

Ville Heinola recorded two points (1G, 1A) in Manitoba’s win against Abbotsford on Thursday night. The defenceman is riding a four-game point streak that has seen him tally five points (2G, 3A) over that span. Heinola has taken a career high 111 shots this season with his eight against Abbotsford on April 28/22 being a new personal best.