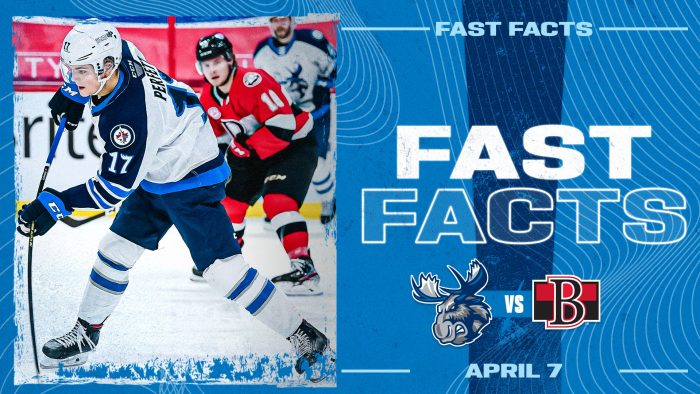 The Moose get back into game action tonight when they host the Belleville Senators. Manitoba went seven days without a game prior to this run of four games in six days. Manitoba grabbed a pair of wins over the Senators in Ottawa earlier in the season and looks to keep that success rolling. Listen to the action on cjob.com/sports and MooseHockey.com/LISTENLIVE or watch with a subscription to AHLTV, now featuring reduced pricing.

Due to their seven-day break away from game action, the Moose have yet to play a contest in April. David Gustafsson stunned during March and recorded 10 points (2G, 8A) in 10 games. The forward paced the club in assists, points and plus/minus (+4) during the month. Gustafsson marked a new AHL career high in collecting his eighth point, March 23 vs. Laval. He reached this feat in six less games than it took him to reach his previous career high of seven points set during the 2019-20 season.

Cole Perfetti recorded his eighth power play point of the 2020-21 season with a tally during Manitoba’s contest against Laval, March 30.  Perfetti paces the club with six assists posted on a man advantage. Meanwhile Jeff Malott leads the Moose with three power play goals. The Moose are tied for first in Canadian Division with 16 power play goals, and also pace the division with a 23.9 per cent success rate.

Cole Perfetti is currently on a two-game point streak. He recorded Manitoba’s lone goal on a power play opportunity, March 30 against Laval and also added an assist, March 28 vs. Laval. The centreman has marked a point streak on three occasions during the 2020-21 season with the Moose, his longest streak lasting three games (Feb. 22 – Feb. 26) where he recorded three points (1G, 2A).

The Moose announced Monday, April 5 that the club signed forward Ty Pelton-Byce to a one-year AHL contract for the 2021-22 season. Pelton-Byce will join the Moose on an amateur tryout for the remainder of the 2020-21 season. Pelton-Byce posted 31 points (12G, 19A) in 24 games with the University of Wisconsin during the 2020-21 season. The alternate captain was named to the NCAA (B1G) Honourable Mention All-Star Team and the club concluded the campaign as NCAA (B1G) Regular Season Champions. The Moose also announced the team signed goaltender Liam Hughes to an amateur tryout. Hughes appeared in 32 games for the WHL’s Winnipeg ICE during the 2019-20 season and posted a 21-11-0 record with a 2.53 goals-against average and a .914 save percentage.