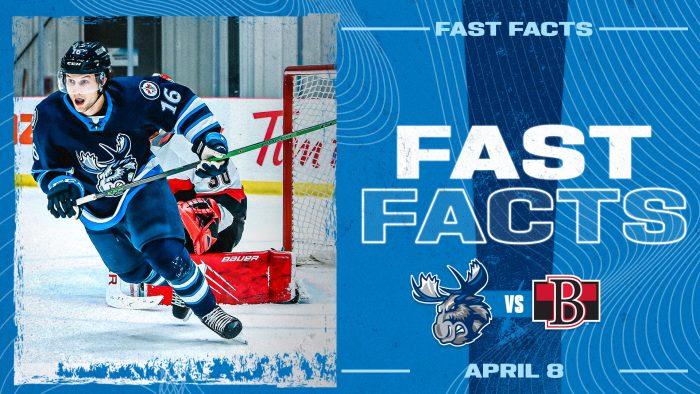 The Moose came up short in their third period comeback bid last night against Belleville. Despite outshooting the Senators 17-1 in the third period and scoring twice, the Moose fell 3-2. The teams get right back to it tonight as Manitoba tries to snap a four-game skid. Listen to the action on cjob.com/sports and MooseHockey.com/LISTENLIVE, or watch live with a subscription to AHLTV.

The Moose saw two players record their first AHL goals last night against Belleville. Westin Michaud scored his first professional tally 3:23 into the third period. Michaud notched the milestone in his 14th professional game and has two points (1G, 1A) on the campaign. Peter Krieger nabbed his first AHL tally just over four minutes later. The Oakdale, Minn. product recorded his first AHL marker in his fourth game. Krieger also has two points (1G, 1A) on the season. A total of 10 players have scored their first AHL goal with the Moose this season.

On each of the first tallies by Michaud and Krieger, a Moose forward tacked on their first assist of the season. Cole Maier recorded his first helper of the campaign on Michaud’s goal. Kristian Reichel got his first assist on Krieger’s marker. Maier had scored four goals this season before tallying the assist while Reichel scored three before his first helper. Maier and Reichel make up two of five Moose this season who have more goals than assists. Jeff Malott leads the way with eight goals and two assists. Joona Luoto (currently with the taxi squad) has two goals and one assist. Haralds Egle has two goals and no assists.

Moose defenceman Declan Chisholm is making the most of his time in Winnipeg this season. The rookie blueliner has six points (1G, 5A) in 13 games at Bell MTS Place or Bell MTS Iceplex. That accounts for all but three of his points on the season. Chisholm is tied for second on the Moose in points on home ice. Since the Moose arrived at their temporary home, Chisholm has points in five of nine games played at the Iceplex.