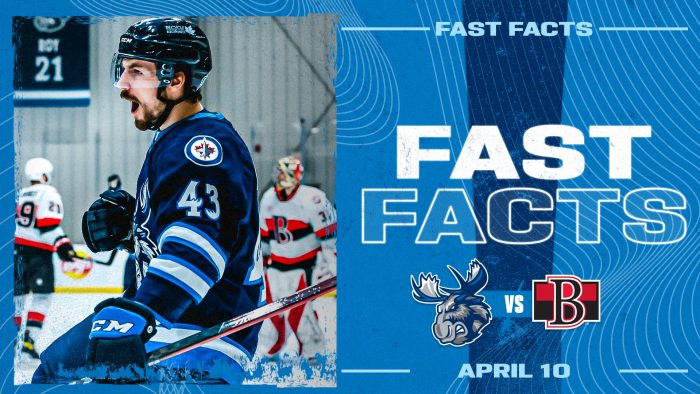 The Moose blasted their way back into the win column with an 8-5 win over the Belleville Senators on Thursday. Down 5-4 heading to the third, the Moose scored four unanswered goals to claim the win. With the first two games of the four-game set split between the clubs, Manitoba tries for its fourth win of the season against Belleville. Listen to the action on cjob.com/sports and MooseHockey.com/LISTENLIVE or watch live with a subscription to AHLTV.

Chalk Up the Win

Cole Kehler earned his first career AHL win on Thursday night against the Belleville Senators. The netminder entered the contest following the first intermission and made eight saves on 10 shots during two periods of action. Thursday night was also Kehler’s first game with the Moose. The Altona, Man. product also appeared in his first AHL contest last season with the Ontario Reign on Nov. 15/19 against San Diego.  It was Kehler’s first game action since March 6/20.

During Manitoba’s 8-5 victory against the Belleville Senators, Marko Dano marked his 100th career AHL point. The forward did so by recording the primary assist on Skyler McKenzie’s first period goal. Dano added a goal and another assist during the contest, notching his second career AHL three-point contest (1G, 2A). Dano’s first career three-point game was also recorded with the Moose, when he suited up for the team during the 2018-19 season. Dano scored a goal and added two assists with Manitoba, March 15/19 against the Texas Stars.

Jeff Malott was awarded a penalty shot with 7:35 to go in the third period of Thursday’s contest against the Senators. The forward took advantage with a wicked wrister and scored on his first AHL career penalty shot attempt. The previous penalty shot goal scored for the franchise dates back six years to the day. On April 8/15, Austen Brassard capitalized on a penalty shot for the St. John’s IceCaps against Springfield Falcons netminder Scott Munroe.

During Manitoba’s win against Belleville, Adam Brubacher scored his first career AHL goal. The defenceman wasted no time finding the stat sheet and marked the tally in his second career AHL game. Brubacher appeared in his AHL debut with the Moose, March 26 against the Laval Rocket. Prior to turning pro, he posted 28 points (4G, 24A) in 36 games while captaining the RIT Tigers during the 2019-20 season. The Elmira, Ont. product was named to the AHA Second All-Conference Team. Brubacher totalled 106 points (26G, 80A) in 148 career games with RIT and earned AHA Rookie of the Year honours for the 2016-17 season.

During Manitoba’s 8-5 win on April 8 against Belleville, a plethora of players recorded their first career AHL multi-assist games. Cole Maier, Johnathan Kovacevic, Cole Perfetti and Declan Chisholm recorded two assists. Marko Dano got in on the action and added two helpers during the game. Dano has marked a multi-assist contest on three occasions with the Moose (the first two in 2018-19) and six total during his AHL career.