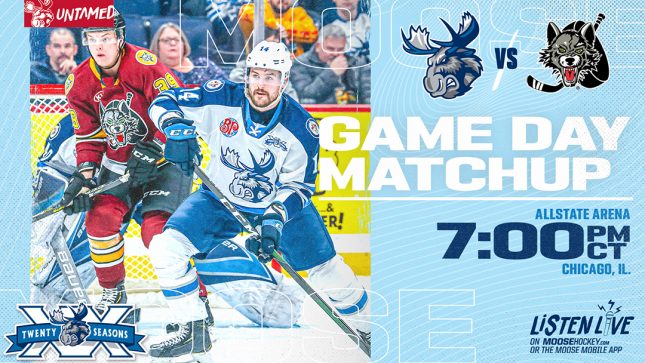 The Moose try for their second consecutive win tonight as they face off against the Chicago Wolves. Both teams are in the second game of a back-to-back. The Moose won a 4-3 shootout decision in Rockford, while Milwaukee dropped the Wolves by a 7-3 score at Allstate Arena.

Manitoba and Rockford went back and forth last night. The IceHogs opened the scoring and led 2-1 heading into the third. Kristian Reichel tied the game less than two minutes into the final frame. JC Lipon struck for his second of the contest late in the third to give the Moose their first lead. Unfortunately for Manitoba, the IceHogs would tie the game with just over two minutes left. Brandon Hagel potted a power play tally to force overtime. Eric Comrie made four saves in the extra frame, and turned aside two of three shootout attempts. Kristian Vesalainen scored in the shootout for the Moose which set the stage for Lipon to score the winner.

“It was good. You never know how (the team) will respond after a couple days off,” Lipon said following last night’s victory. “We came out hard and kept (Rockford) to the outside. They’re a pretty skilled team so you have to be patient. It was awesome to get two points, especially coming from behind.”

With two goals in the contest, Lipon moved into a tie with C.J. Suess for second on the Moose goal list with 11 tallies. He was the fourth player on the team to reach double digits on the season. It’s the fifth consecutive season the Regina, Sask. product has scored at least 10 goals. With 26 points on the season, Lipon has already matched his offensive production from the 2018-19 campaign in 13 less games. Lipon’s winner last night was his first shootout attempt since scoring a shootout winner for the St. John’s IceCaps on Feb. 11, 2015. The veteran winger has scored on three of his eight career shootout attempts.

Now the Moose shift their attention to the Wolves as the teams kick off a run of three straight games against each other. It’s the only time this season Manitoba will face the same team in three consecutive matchups. The two teams play each other more than any other team this season, clashing 12 times. The Moose hold a 3-2-0 record against the Wolves on the season and 2-1-0 at Allstate Arena. The teams have only faced off once in consecutive games so far this season, with the Moose winning 3-1 on Dec. 6 and the Wolves responding with a 4-2 win on Dec. 7.

Lipon planned on keeping things simple last night when it comes to preparing for this evening’s matchup that comes less than 24 hours after the hard-fought shootout win.

“It’ll be tough. We’ll get some sleep tonight, and come out hard.”

Coverage of this evening’s tilt on moosehockey.com/listenlive and AHLTV gets going at 6:45 p.m. CT. Puck drop is slated for shortly after 7 p.m.