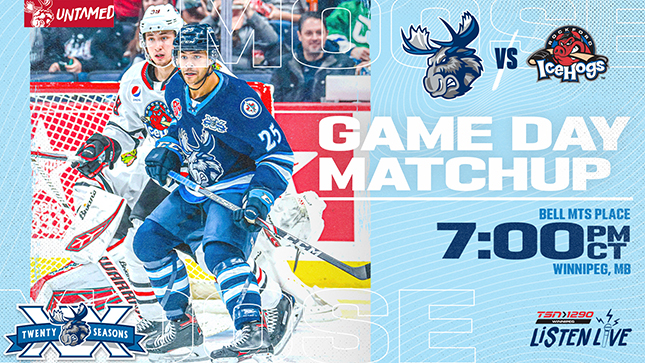 The Moose start a stretch of playing seven games in 11 days when they drop the puck against the Rockford IceHogs. Manitoba is coming off a light segment of the schedule, just playing six games over the past 23 days. The two teams are separated by three points as the clubs try to climb their way back into the playoff picture.

The last time the Moose won back-t0-back games, their opponents were the IceHogs back on Dec. 29 and 31 at Bell MTS Place. Manitoba holds a 4-2-0 record against the Chicago Blackhawks affiliates this season and can claim the season series with a win in either tonight’s or Wednesday’s game. Skyler McKenzie leads Manitoba with six points (2G, 4A) in six games against the IceHogs. Coming back the other way, Brandon Hagel paces Rockford with five goals in six games against the Moose.

The squads’ previous meeting back on Jan. 31 saw the Moose come away with a 4-3 shootout win in Rockford. JC Lipon scored twice for the Moose and added the shootout winner. Kristian Reichel provided a timely goal early in the third period to round out the Moose scoring in regulation. The Moose found themselves down 2-1 until Reichel tied the game. Lipon’s second of the contest pushed the Moose in front, but Hagel tied the game and forced the shootout with a power play goal in the final minutes.

The Moose have been excelling at keeping the puck out of their net over the past nine games. Excluding empty net goals, the Moose have averaged 2.1 goals against per game. Eric Comrie and Mikhail Berdin haven’t allowed more than three goals in a game during that stretch. The Moose are 4-5-0 in those nine contests.

The Moose have found most of their success on home ice this season, owning a 14-10-0 record at Bell MTS Place. Along with that mark some Moose players see their production jump when skating in friendly territory. Forward Kristian Vesalainen is tied with Seth Griffith for the team lead when it comes to scoring at Bell MTS Place with 18 points at home. For Vesalainen, that represents 72 per cent of his production this season. Meanwhile, forward Cole Maier has recorded 10 of his 12 points and five of his six goals at home this season. In net, Mikhail Berdin owns a 12-4-0 record and a .926 save percentage at home, versus a 6-14-0 record and .904 save percentage on the road.

Jimmy Oligny is clear to return to active duty this week after serving his suspension in two games against Chicago last week. Oligny was banned for a kneeing penalty against the IceHogs on Jan. 31. The St. Michel, Que. product has been one of Manitoba’s most consistent defenders on the campaign. Along with the physical presence he provides in the defensive zone, Oligny has chipped in offensively with 11 points (3G, 8A) in 42 games. He’s three points shy of matching his career high set in 2015-16 and has already matched his high in goals. The veteran defender comes into tonight’s action with 349 AHL games under his belt.

Tickets for the tilt between the Moose and IceHogs are still available and moosehockey.com/tickets. Coverage of this evening’s matchup starts at 6:45 p.m. CT on TSN 1290, moosehockey.com/listenlive and AHLTV.