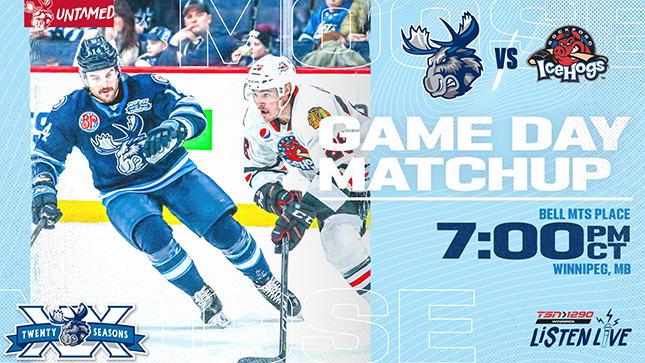 The Moose and IceHogs do battle again tonight as Manitoba tries to crack back into the win column. Last night’s tilt saw the Moose open the scoring, but fall 2-1 to Rockford.

The hosts were dominant in the opening frame. Manitoba outshot the IceHogs by a 12-3 count and didn’t allow a shot on goal until the 13:22 mark of the period. Suess’ tally came on the final shot of the period. With the Moose on the power play, Seth Griffith pounced on a a friendly bounce off the back wall and slid the puck over to Suess who tucked a shot up and over Kevin Lankinen. Alexandre Fortin tied the game in the second period for the IceHogs and John Quenneville scored the eventual game-winner early in the third. Lankinen finished the night with 28 saves on 29 shots. Moose defenceman Cameron Schilling feels his team needs to improve on its second periods.

“We’re being a little bit too cute through the neutral zone,” Schilling explained after last night’s loss. “I think we come out simple and play our smart game to start the game and then come out in the second I think that guys want to come to open it up a little bit more and get away from our game. That’s not what got to that point in the game anyways. So I think that’s the biggest thing. I don’t know how to change that, but it’s just a mindset coming out for the second and just coming out with the same mindset that we do in the first and the third.”

Eric Comrie was solid for the Moose, making 25 saves in the defeat. It was the third straight contest a Moose goaltender has made 25 saves.  Comrie (twice) and Mikhail Berdin haven’t allowed more than two goals in those three contests. Berdin would be a good bet to start this evening’s tilt in the back-to-back situation. The Ufa, Rus. product has been solid against the IceHogs this season with a 3-1-0 record supported by a 2.01 goals-against average and a sparkling .941 save percentage.

Suess’ goal was his 13th of the season, bringing the second-year pro to 22 points on the campaign. The Forest Lake, Min. product has seven points (3G, 4A) over his past 10 games and hasn’t had consecutive games without a point during that span. Suess has scored the past two Moose goals, including the game-winner last Thursday against Chicago. It was also a power play marker. Suess is tied for the Moose lead with six power play goals on the season.

A couple of IceHogs to watch out for combined for the game-winning goal last night. Dylan Sikura is on an eight-game point streak.  He’s now just two points back of his brother, Tyler, for the top spot on the Rockford scoring list, tallying 28 points (12G, 16A) in 33 games. Meanwhile, John Quenneville, a former Brandon Wheat King, has goals in each of his last four contests. He ranks second on the club with 13 goals in 30 games.