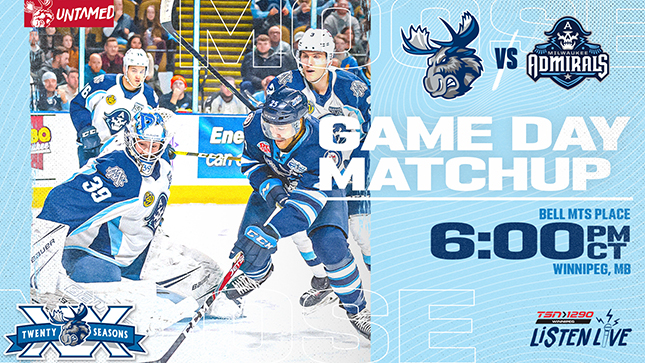 The Moose look to right the ship tonight when they host the league’s top team at Bell MTS Place. The Milwaukee Admirals sit atop the AHL standings with a 34-10-4-3 record, good for a .735 points percentage. That is seven points and .055 percentage points clear of the next closest team.

The Moose and Admirals have only faced off twice this season. Both those games went down in Milwaukee where the Moose dropped 6-3 and 6-4 losses. In the most recent meeting, the Moose led three times before surrendering four consecutive goals over the second and third periods. The Moose racking up seven goals in two games against the Admirals is well above Milwaukee’s 2.3 goals against per game average this season. Forward JC Lipon says at some point the Moose will start converting on their scoring opportunities.

“Well it’s a good challenge for us right? We haven’t played them in awhile. So we’re just going to have to come out hard and hopefully the bounces… you know we get that many chances (like Thursday) were going to score some goals that’s just the way the game goes.”

The Moose last faced Milwaukee back on Nov. 27 at UWM Panther Arena. That meeting was Manitoba’s 21st game of the season. Tonight’s matchup comes in game number 53 for the Moose. The clubs will be plenty acquainted by the end of the campaign, though. Including this evening’s tilt, the teams face off six times in the final 24 games of the campaign, including five times in the next month.

Both teams are coming off losses on Thursday. The Moose fell 5-2 to the Rockford IceHogs on home ice, while Milwaukee surrendered five goals in the third period and lost 5-2 in Chicago against the Wolves. The defeat was just the Admirals’ 10th regulation loss of the campaign. JC Lipon and Michael Spacek scored the Moose goals on Thursday. Manitoba outshot Rockford by a 35-21 mark in the loss.

Leon Gawanke picked up his 19th assist and 20th point of the season in the loss. The Berlin, Ger. native ranks second on the Moose in assists this season and is the second defenceman on the club to hit 20 points. Gawanke joins Sami Niku, Logan Stanley and Josh Morrissey as the Manitoba rookie defenders to reach the 20-point mark since the club returned to Winnipeg. Gawanke also leads Moose rookies in points while sitting tied for sixth in assists among the league’s rookie defenders.

After missing his first game of the season due to illness on Wednesday, Kristian Vesalainen got back into game action on Thursday. Though the big winger didn’t get on the scoresheet, he had numerous scoring chances and recorded four shots on goal. The quartet of shots pushed him over 100 for the season, his first full campaign in North America. Vesalainen ranks second on the Moose with 101 shots this season. He has at least one shot on goal in 10 consecutive games, recording three or more shots in half of those contests. The Helsinki, Fin. product also ranks fifth among Manitoba shooters with a 9.9 shooting percentage (>50 shots).

Tickets for tonight’s game are available at moosehockey.com/tickets or through the Moose Mobile App. Coverage of this evening’s tilt on TSN 1290, moosehockey.com/listenlive and AHLTV gets rolling at 6:45 p.m. CT.