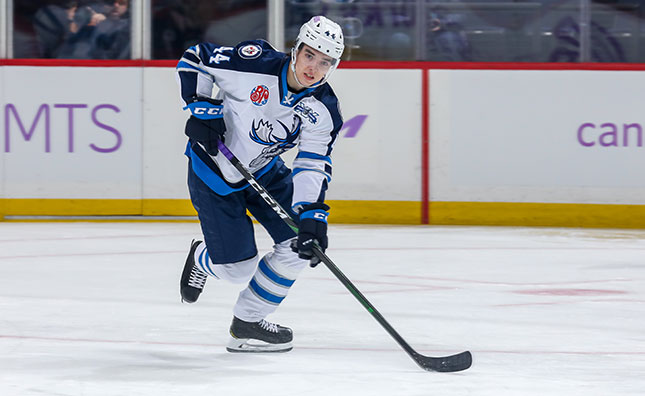 After over 11 months between games, it’s finally time for the Manitoba Moose to hit the ice in regular season action. The club opens its season with four games against the Toronto Marlies at Bell MTS Place. The first contest goes tonight at 6 p.m. You can watch the matchup for free tonight at AHLTV.com or listen in as Daniel Fink has the call on CJOB.com/sports and moosehockey.com/listenlive.

Let’s get you set up for tonight’s opener with your fast facts.

On Feb. 12/21, the Jets announced the team assigned defencemen Ville Heinola and Dylan Samberg to the Moose. Heinola  racked up 14 points (1G, 13A) in 19 games with Lukko during the 2020-21 season before capturing a bronze medal with Finland at the 2021 World Junior Championship. Heinola appeared in three games with the Moose during the 2019-20 season and recorded one assist. Samberg recorded 21 points (1G, 20A) with Minnesota-Duluth during the 2019-20 campaign despite playing in just 28 games. He was originally drafted by the Jets in the second round (43rd overall) of the 2017 NHL Draft.

The Moose announced Jan. 19/21 the team has entered a loan agreement with the Vancouver Canucks. As part of the agreement, the Canucks loaned forward Tyler Graovac, defenceman Ashton Sautner and goaltender Arturs Silovs to the Moose. Graovac has 184 points (87G, 97A) in 331 career AHL games spanning over eight seasons. Sautner tallied 12 points (1G, 11A) in 51 games with the Utica Comets during the 2019-20 season. Silovs suited up for the Barrie Colts of the OHL where he posted a 16-13-4 record supported by a 3.87 goals-against average and a 0.891 save percentage.

Put It In Writing

The Jets announced June 15/20 that they signed forward Kristian Reichel to a two-year, entry-level contract. The winger’s 2019-20 season was shortened due to injury, however Reichel made the most of his time on the ice and posted 17 points (12G, 5A) in 39 games. Manitoba’s alternate captain finished last season strong and recorded five assists in the last seven games. In 94 games with the Moose, Reichel has 27 points (14G, 13A).