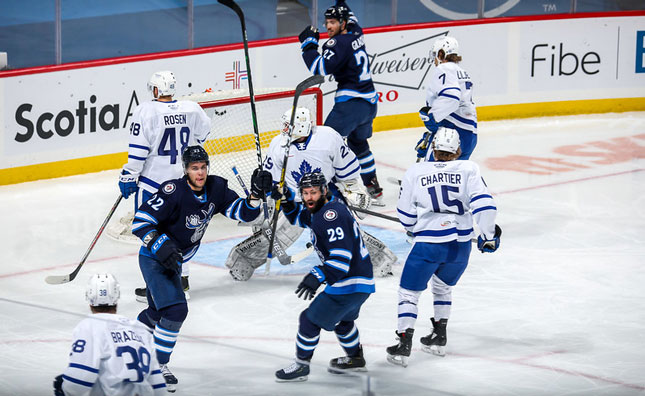 It’s game two of a four-game set between the Moose and Marlies tonight at Bell MTS Place. Toronto played spoiler in the Moose home opener by taking a 3-2 win last night. Manitoba tries to turn the tables this evening to grab its first win of 2021. Listen in as Daniel Fink has the call on CJOB.com/sports and moosehockey.com/listenlive or watch with a subscription to AHLTV. Puck drop is 7 p.m. CT, coverage begins at 6:45 p.m. CT.

During Manitoba’s home opener last night against Toronto, three Moose players recorded the first AHL point. Cole Perfetti and Declan Chisholm both scored their first professional goal in their AHL debuts. The assist on Cole Perfetti’s tally was credited to Bobby Lynch. The Grand Blanc, Mich. product made his AHL debut Dec. 31/19 against Rockford and appeared in three games with the Moose during the 2019-20 season.

Manitoba’s game against the Toronto Marlies on Monday, marked the club’s 100th meeting. The Moose hold a 44-49-3-4 against Toronto all-time. During the 2019-20 season, Andrei Chibisov and Kristian Vesalainen paced Manitoba and recorded a goal and an assist each against the Marlies. Pontus Aberg led Toronto with six points (3G, 3A)against the Moose.

On Manitoba’s current 31-man roster, 15 players were selected in the NHL Entry Draft. Of these skaters, 10 were picked by the Winnipeg Jets, notably Cole Perfetti (10th overall, 2020) and Ville Heinola (20th overall, 2019) who were selected in the first round. Of the five players not originally selected by the Jets, two of which have a resume that includes NHL games. Dano, (Columbus, 27th overall, 2013) has played in 141 career NHL contests split between four clubs and recorded 45 points (19G, 26A). Tyler Graovac (Minnesota, seventh round, 191 overall, 2011) has suited up for 70 NHL games and posted 11 points (2G, 9A).

Nine players on Manitoba’s current roster were born in Ontario. Seven out of the nine players stayed in their home province to spend their junior career developing in the OHL. Nathan Todd (2014-16) and Tyler Graovac (2009-13) both played for the Ottawa 67’s. Cole Perfetti ranked second in the OHL in points (111) and assists (74) during the 2019-20 season. Brent Pedersen spent four seasons in the OHL split between Kitchener and Oshawa. Rookies Declan Chisholm, Trent Bourque and Victor Hadfield spent their junior career in the OHL.