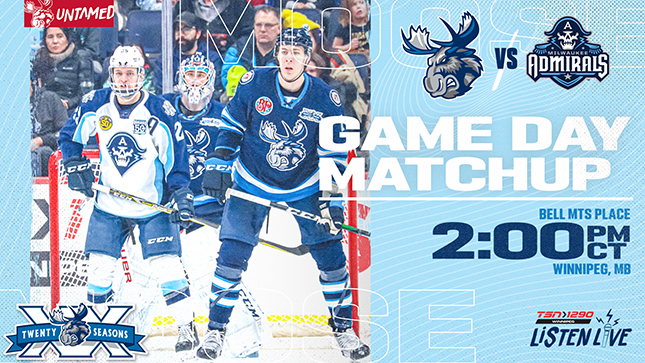 The Moose and Admirals go at it again today in front of what will be a packed house at Bell MTS Place. The teams previously matched up in downtown Winnipeg on Saturday. That contest saw Manitoba come away with a 1-0 victory.

Saturday’s tilt wasn’t your typical 1-0 hockey game. Both sides had plentiful chances to score throughout the contest. The Moose hit the posts in behind Troy Grosenick four times throughout the game, the Admirals rang one of their own. Meanwhile Eric Comrie was sensational in making 35 saves for his first shutout of the season. Brent Pedersen came through with the game-winner early in the third period on a gorgeous finish to a partial breakaway. It was a big team win for the Moose who knocked off a team 31 points ahead of them in the standings to pull back within seven points of the playoff line.

“We deserved that win. We’ve deserved to win a lot of the games we’ve played lately and we haven’t gotten the results,” said Comrie following the victory. “Even today, we could have gotten down. We hit a lot of posts, but we stayed with it and we battled through the whole game. We deserved that.”

The goose egg was the ninth of Comrie’s AHL career. That moves him into a tie with Eddie Pasquale for fifth on the franchise list in shutouts. Comrie’s previous clean sheet came back on Jan. 10, 2019 when he posted a similar 35 saves to blank the Laval Rocket. Comrie has wins in three of his last four starts while posting a .920 or higher save percentage in all four games. Since returning to the Moose, Comrie has a .927 save percentage and a 2.36 goals-against average over 12 appearances. He has a .920 or high save percentage in seven of his 11 starts for the Moose. The netminder also comes into today’s game with 199 AHL appearances under his belt.

Pedersen’s third goal of the campaign was his second game-winning tally. The eventual winner came at a crucial time for the Moose after the team had put together numerous chances. Just when it seemed as though their efforts would continue to prove fruitless, Logan Stanley sprung Pedersen who finished off the play by gently tucking the puck up under the crossbar.

“Any time anyone scores, on the bench it’s a great thing. Especially when you can go up one goal in the third period,” commented Pedersen at the team’s skate yesterday. “So we’re going to have to be ready on Monday to do it again.”

The Moose have spread around the winners this season, with 13 players cashing in for Manitoba through 23 victories. Pedersen is tied with Seth Griffith and Cole Maier at two on the season, while Michael Spacek, Emile Poirier and C.J. Suess each have three to lead the group. The Moose actually have four players on the roster whose game-winning tallies account for at least 33 per cent of their goals on the season. Pedersen leads the way with 67 per cent, followed by Poirier (50%), Spacek (38%) and Maier (33%).

Manitoba will have to be ready for a highly motivated Milwaukee club which lost just its 11th game in regulation on Saturday and faced its second shutout defeat. The 1-0 loss to the Moose marks just the second time this season the Admirals have lost consecutive games in regulation. It’s just the fourth time the club has dropped multiple games in a row. Milwaukee is mired in its worst stretch since the beginning of the season when the Admirals opened with a 2-1-1-2 mark in their first six games. Over their past five, the Admirals have a 1-3-0-1 mark. As a result, the Iowa Wild have been able to close the gap for the division lead to just five points.

Tickets for today’s game are limited but still available at moosehockey.com/tickets and through the Moose Mobile App. Coverage of today’s matinee on TSN 1290, moosehockey.com/listenlive and AHLTV gets going at 1:45 p.m. CT.