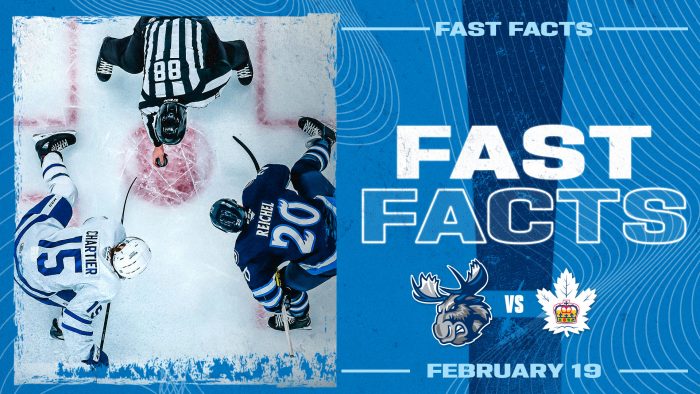 The Moose claimed their first win of the 2020-21 campaign last night with a 4-2 victory over Toronto. Mikhail Berdin led the way with 43 saves on 45 shots while Tyler Graovac notched three points (1G, 2A). Now Manitoba looks to even the season-opening four-game set against Toronto with a second straight win. It’s an early puck drop with the game getting going at 4 p.m. CT. Catch the game on cjob.com/sports and moosehockey.com/listenlive or watch with a subscription to AHLTV. Coverage begins at 3:45 p.m. CT.

In the meantime, here are some Fast Facts.

Tyler Graovac tallied two assists in last night’s win to reach the 100-assist mark in his AHL career. Graovac reached the milestone in 334 AHL contests split between the Moose, Utica Comets, Stockton Heat, Hershey Bears and Iowa Wild. The Brampton, Ont. product racked up three points in total last night. It was the seventh time in his career Graovac had notched three or more points. The veteran forward leads the Moose with four points (1G, 3A) in three games this season.

Trent Bourque made his debut with the Moose last night against the Marlies. He recorded an assist during the contest. The defenceman appeared in five games with the Belleville Senators and recorded one assist during the 2019-20 season. Last season Bourque appeared in 51 ECHL games split between the Brampton Beast and Newfoundland Growlers and posted 24 points (3G, 21A). Meanwhile, forward Haralds Egle made his professional debut last night, recording one shot on goal and a plus-one rating. The Liepaja, Latvia native posted 17 points (6G, 11A0 in 18 games with Miskolci DVTK of the Slovak league this season before joining the Moose.

The Moose have scored eight goals in three games to start the season. Of those eight goals, four of the tallies have been scored by players recording their first AHL goal. Two of the four went down as players’ first professional goals. Of the 11 players to record a point so far for the Moose, three posted their first AHL points.

Mikhail Berdin was awarded the first star of the game after turning aside 43 of the 45 shots he faced last night. The third-year pro has faced 40 or more shots 11 times in his career and holds a 7-2-2 record in those contests. The Ufa, Russia native stopped all 19 Marlies shots in the first period of yesterday’s matchup. During the 2019-20 campaign, Berdin held a .929 save percentage in the first period of his 20 appearances at Bell MTS Place. He held the opposition off the scoresheet in the opening frame eight times.