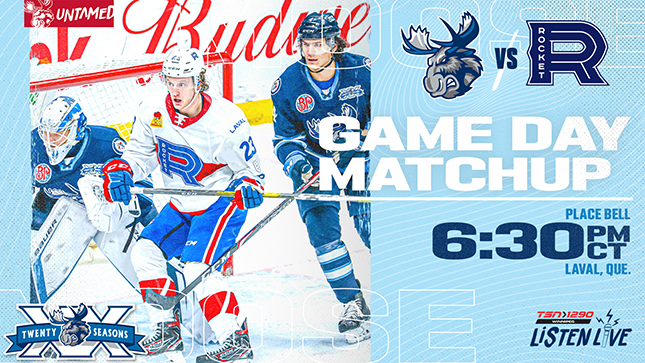 The Moose and Rocket go head-to-head for the second time in three days after a thrilling matchup on Wednesday. The Moose can claim the season series with a point in the game after their 5-4 shootout win two days ago.

Manitoba got out to a hot start at Place Bell on Wednesday, scoring twice in the opening minutes of the game. Seth Griffith finished off a two-on-one and David Gustafsson nabbed his first AHL goal. The second period got tough for the visitors as the Rocket blasted back with three goals in the final nine minutes to take a 3-2 lead to the third. Leon Gawanke tied things up midway through the period, but Charles Hudon restored the Laval lead minutes later. With 1:18 to go, Michael Spacek ripped home a Cameron Schilling rebound to force extra time. After Mikhail Berdin made three saves in overtime, the Moose goaltender was perfect in the shootout. Seth Griffith scored the lone goal of the extra shots and the Moose came away with the 5-4 win.

The Moose remain undefeated when traveling past 60 minutes this season. The Moose are 4-0 in overtime and 2-0 in the shootout. They are the only team in the AHL without a loss in extra time this season. The win was also Manitoba’s second victory of the season when trailing after 40 minutes of play.

Michael Spacek comes into the game having reached a milestone against the Rocket on Wednesday. In posting two points (1G, 1A) on Wednesday against Laval, Spacek reached 100 points (36G, 64A) in his AHL career. The forward has posted 20 points (9G, 11A) in 41 games for the Moose this season. He is currently tied for fifth on Manitoba with nine goals on the campaign. The Pardubice, Czech Republic native reached 100 career AHL points in 189 games for the Moose.

Spacek wasn’t the only Moose to record multiple points in the contest. Leon Gawanke (1G, 1A), Kristian Vesalainen (2A) and JC Lipon (2A) all notched multi-point games. Gawanke’s assist brought him up to 20 on the season. Lipon’s two helpers pushed him to 29 points for the campaign, just one away from hitting 30 points for the fifth time in his career.

The Rocket will look considerably different from game-to-game as the Montreal Canadiens swung a trade with the Pittsburgh Penguins on Thursday. Forward Riley Barber and Phil Varone were both dealt to Pittsburgh (and Wilkes-Barre/Scranton) in exchange for forwards Joseph Blandisi and Jacob Lucchini. Blandisi has appeared in 26 games in the AHL and 21 contests in the NHL this season. He had 14 points (6G, 8A) with WB/Scranton before the trade. Meanwhile, Lucchini had 15 points (7G, 8A) in 53 games with the AHL Penguins prior to the deal.

**The previously scheduled episode of Moose Weekly has been moved to air prior to tomorrow’s game against Belleville.