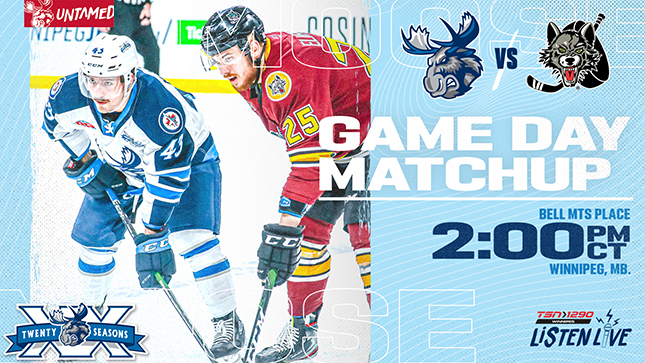 After a week off from game action the Moose return to Bell MTS Place for a matchup against the Chicago Wolves tonight. Points are imperative for the Moose as they try to fight their way back into the playoff hunt. Chicago holds down the final playoff spot in the Central Division, eight points clear of Manitoba. A pair of wins this weekend against the Wolves would see that gap shrink considerably.

Be sure to snag some Manitoba Experience raffle tickets on the concourse today. Proceeds from the raffle go to support the Assiniboine Park Zoo Polar Bear Rescue Team. The Grand Prize is a trip for four to Churchill, Man. and the rare chance to see polar bears in their natural habitat.

The Moose come in following an Eastern Canada road swing that saw the club go 1-1-1 through Laval (twice) and Belleville. Manitoba opened the swing with a 5-4 shootout win over the Rocket on Wednesday, followed by a 4-1 loss to Laval on Friday, and wrapped up with a 5-4 overtime loss to Belleville on Saturday. The Moose jumped out to a 3-0 lead over the Senators in that Saturday matchup. The hosts battled back to tie the game 3-3 before Kristian Reichel pushed the Moose back in front late in the third. Unfortunately for the Moose, Rudolfs Balcers tied the game again with seconds left on the clock. Alex Formenton went on to win the game in overtime for Belleville.

Manitoba’s roster has been in flux this week with multiple changes. Early in the week the team reassigned forward Alexis D’Aoust and defenceman Hayden Shaw to the Jacksonville Icemen. With Ryan White suspended for this weekend’s games, the club then re-signed forward Nathan Todd to a professional tryout. Todd has appeared in 13 games with the Moose this season while recording one goal. He also suited up for four contests with Belleville. The Winnipeg Jets also had a hand in changing the Moose roster. The NHL club recalled forward C.J. Suess and defenceman Nelson Nogier. Suess posted a career-high three assists in Belleville while Nogier also picked up a helper against the Senators.

If anyone wanted to avoid a week-long break, it may have been Kristian Reichel. Following an eight-game pointless streak, his longest of the season, the second-year Moose forward rattled off three goals in his previous two games. That included his first AHL multi-goal game against Belleville. The wild thing about his scoring outburst is all three tallies came directly following faceoff wins. In two instances, Suess won the puck back to Reichel cleanly for the forward to snap home a quick shot. The third saw Reichel bust through a couple of Senators to grab the puck and sneak a shot to the back of the net. The Litvinov, Czech Republic product is up to 10 goals on the season, the fifth Moose player to reach the mark. Reichel ranks second on the club in goals per game.

The Moose offence is heating up, scoring nine goals over the three-game road swing. The team tallied four goals twice on the trip and looks to keep that offensive momentum running. Meanwhile Manitoba will need to make some adjustments on the defensive side of the puck. After allowing more than two goals just once over a five-game span, the Moose have surrendered at four goals against in four consecutive outings.

Owning the final playoff spot in the Central Division, the Wolves have stumbled a bit of late. A record of 2-4-0 in their last six games has allowed Rockford to pull even in the race and San Antonio to move within one point. Chicago is dealing with a rash of injuries and call-ups to the Vegas Golden Knights. That said, the club still features a potent lineup with the likes of Brandon Pirri, Lucas Elvenes and Curtis McKenzie up front.

The Wolves also feature a trio of former Moose with Tye McGinn (2018-19), Cam Maclise (2017-19) and Dan DeSalvo (2015-17) currently on the roster. McGinn leads all skaters in the season series with four goals in eight games of the set. Should he suit up for the game, it will be DeSalvo’s first game in Winnipeg since April 9, 2017. The Rolling Meadows, Ill. product enjoyed the best success of his AHL career with the Moose, posting 54 points (23G, 31A) in 83 games across two seasons. Meanwhile, Maclise appeared in 105 games, posting 20 points (9G, 11A) over two seasons with the Moose and would play his first game in Winnipeg since last season.

Tickets for today’s game are still available at moosehockey.com/tickets. Coverage on TSN 1290, moosehockey.com/listenlive gets rolling at 1 p.m. CT with Moose Weekly hosted by Austin Siragusa. The game will also be webcast at AHLTV.