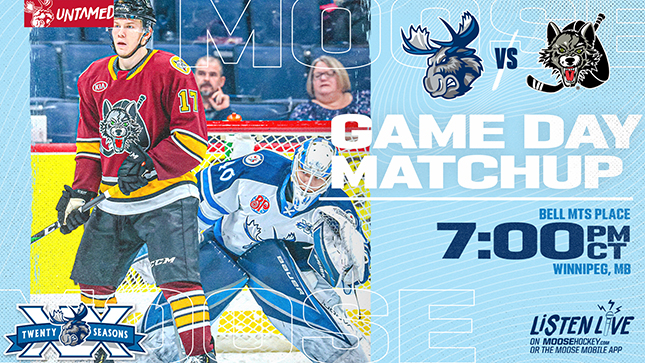 The Moose and Wolves had a few days off following the initial contest of their three-game series, but they kick things back into high gear tonight at Bell MTS Place. The teams clash the next two evenings as the Moose try to gain some ground on Chicago. The first meeting between the teams saw the Wolves score a 5-2 victory over Manitoba last Saturday.

That matchup saw the Moose play very solid hockey for about 50 of 60 minutes. They outshot the Wolves and had numerous chances. However, Chicago scored three goals in just over five minutes early in the second period and that powered the hosts to victory. Manitoba pulled to within a goal late in the contest as Seth Griffith and Kristian Reichel each tallied in the third. A pair of empty net goals locked things up for the Chicago win. With the victory, the Wolves put a seven-point gap between themselves and the Moose for the third spot in the division. They also evened up the season series at three wins apiece.

“We didn’t get the outcome we wanted last game, but when you have a three game series you just want to set the tone,” explained forward Skyler McKenzie. “So you have to do whatever you can and bring a physical presence so they know you’re going to be there.”

The Moose roster went through some changes yesterday. The Winnipeg Jets led things off by recalled forward Andrei Chibisov and reassigning defenceman Cameron Schilling. The Moose then signed forward Danny Moynihan to a professional tryout in the evening. Chibisov is the 13th player this season to spend time on the roster of both the Moose and the Jets. Meanwhile Schilling adds a key piece back to the defensive group and leads the team’s defenders with 20 points (5G, 15A). Moynihan has 35 points (15G, 20A) in 47 games with the ECHL’s Tulsa Oilers this season. He has some AHL experience with 11 games under his belt. Those came with Utica during the 2017-18 season.

Schilling also represents an important veteran presence for the Moose blue line. Especially with Jimmy Oligny out of the lineup for the next two games due to suspension. With Schilling joining the Jets in recent weeks, Oligny has been relied on by the club and his physical presence will be missed by the team.

Tonight’s game is also scheduled to be the much anticipated AHL debut of forward David Gustafsson. The Swedish forward was assigned to the Moose following the World Junior Championship, but hasn’t played due to an upper-body injury. Gustafsson scored one goal in 22 games with the Jets and picked up four points (1G, 3A) in seven games at the World Juniors. The 2018 second round pick accumulated 12 points (2G, 10A) in 36 games with HV71 in the Swedish Hockey League.

Tickets for tonight’s game are available at moosehockey.com/tickets or through the Moose Mobile App. Coverage of this evening’s tilt gets going at 6:45 p.m. CT on moosehockey.com/listenlive and AHLTV.