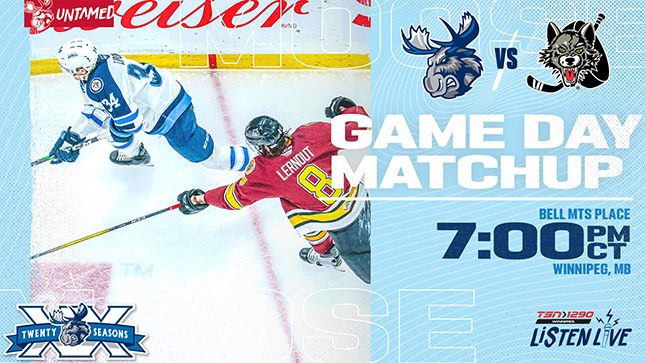 The Moose celebrate 20 seasons of playing in Winnipeg tonight in their 20th Season Game against the Chicago Wolves. The evening gets rolling with the organization retiring Jimmy Roy’s number 21. The first 3,000 fans through the doors can commemorate the event with their own mini replica banner. Manitoba will wear special edition jerseys which honour the various looks of the team over the past two decades. Tonight’s game presentation features messages and memories from Moose alumni from around the world. Fans are encouraged to arrive early so they can be in their seats for the pre-game ceremonies.

This evening’s affair is a rematch between the two teams after the Moose grabbed a 3-2 win last night. C.J. Suess scored a power play goal with 3:46 left in regulation to lift the Moose to the win. Newcomer Danny Moynihan and Michael Spacek each tallied as well. Eric Comrie made 25 saves, including 14 in the third period, to push the Moose to the win. Moynihan opened the scoring late in the first period, only to have the Wolves respond with two quick goals in the second as the visitors gained the lead. Spacek scored with six minutes left in the frame and sent the game to the third tied. That set the stage for Suess to score the winner late in the contest.

“I thought I saw a complete game,” said Suess following the win. “We came out hot in the first period and went into the second period with the lead. They scored a couple quick ones in the second there. i thought we bounced back nice at the end of that, getting a second goal. We came out in the third and played the right way.”

Moynihan’s goal was the first of his AHL career. The Boston, Mass. product was signed to a professional tryout by the Moose Wednesday evening. Yesterday’s game was his first in the AHL since he played 11 games for the Utica Comets during the 2017-18 season. Moynihan’s line with Cole Maier and Brent Pedersen quickly found chemistry and went to work in the game, spending plenty of time in the offensive zone.

“It was awesome, especially not being able to play last year,” said Moynihan who missed the entirety of the 2018-19 season for medical reasons. “It’s a big comeback year for me and it made (scoring the goal) that much extra special for sure.”

Michael Spacek and Kristian Reichel have been rolling ever since being matched up on a line on Jan. 15 against Belleville. In the eight games since, Spacek has seven points (3G, 4A) while Reichel has four points (3G, 1A). Spacek has recorded three multi-point games in that span and Reichel comes into this evening’s tilt on a three-game point streak. While Spacek has seven of his 17 total points on the season in the past eight outings, Reichel has been the model of consistency since returning from injury on Dec. 7. The Litvinov, Czech. native hasn’t gone more than two games without a point in 23 games and has 12 points (7G, 5A) during that time. Spacek sits just three points away from reaching 100 in his AHL career.

Mikhail Berdin is scheduled to get the start tonight for the Moose. Tied for the AHL lead in wins, Berdin has been lights out against the Wolves this season. In four games, Berdin holds a 3-1-0 record with a 1.52 goals-against average and a 0.942 save percentage and one shutout. The Ufa, Rus. native has only allowed six goals in 237:16 of action against Chicago.

Tickets for tonight’s game are available at moosehockey.com/tickets or through the Moose Mobile App. Coverage of this evening’s matchup on TSN 1290, moosehockey.com/listenlive and AHL TV begins at 6 p.m. CT with Moose Weekly hosted by Austin Siragusa. The pre-game show starts at 6:45 p.m. and will carry all of tonight’s pre-game ceremonies. The game will also be available on Facebook Watch as the AHL’s Facebook Game of the Week.