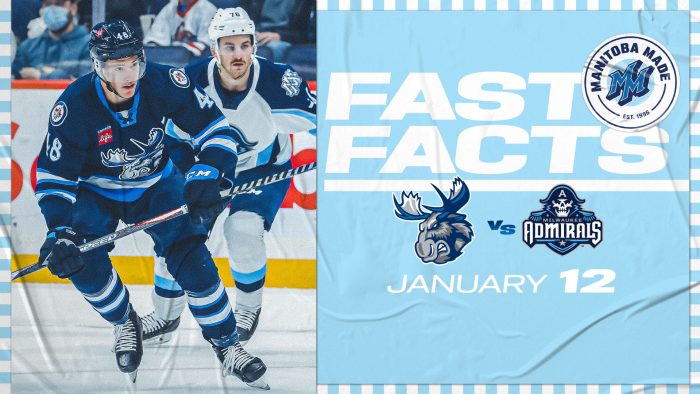 The Moose hit the mid-point of their six-game road trip with a matchup against the Milwaukee Admirals. Manitoba’s coming off a pair of wins in Texas to start the trip. Haralds Egle’s last-second goal pushed the Moose to a 3-0-0-1 record in 2022. Coverage of tonight’s game gets going at 6:45 p.m. CT on CJOB.com/sports, the Manitoba Moose App and AHLTV.

On Jan. 8 the Moose recalled defenceman Dean Stewart from the ECHL’s Wichita Thunder. He made his AHL debut that night against the Texas Stars. On Jan. 9 the Winnipeg Jets reassigned defencemen Ville Heinola and Dylan Samberg along with goaltender Mikhail Berdin from the Moose to the Taxi Squad. Manitoba in turn recalled a trio of defenceman on Jan. 10 including Hayden Shaw from the ECHL’s Trois-Rivieres Lions and both Trent Bourque and Tristan Pomerleau from the Newfoundland Growlers of the ECHL. Jan. 11 saw goaltenders Berdin and Arvid Holm return to the Moose. Manitoba also announced the signing of Matt Alfaro, Chris Martenet, Keoni Texeira to professional tryouts while releasing goaltender Hayden Lavigne.

Forward Greg Meireles rolls into tonight’s contest on a three-game assist streak, tallying one helper in each of the contests. Looking back over the playmaker’s past 10 games, Meireles has seven assists in that span. The Ottawa, Ont. product has recorded 13 points (2G, 11A) through 27 games this season. Meireles leads Moose rookies in scoring and is tied for 30th among the league’s first-year skaters. Meireles is no stranger to putting up strong offensive numbers, having recorded 97 points (36G, 61A) for the OHL’s Kitchener Rangers during the
2018-19 OHL season.

Forward Isaac Johnson recorded his first AHL goal in the 5-4 win over the Texas Stars on Jan. 8. The forward, who was playing in his fifth AHL contest, took a pass on the power play from Ville Heinola and was able to redirect it past Anton Khudobin to knot up the game 3-3 in the third period. It was both the first AHL goal and point for the forward, who started the year with the ECHL’s Newfoundland Growlers and recorded nine points (6G, 3A) in 18 games before receiving the call to join the Moose.

Get in on the Action

The Moose are coming off two straight victories over their Central Division rials, the Texas Stars. The games were high-scoring affairs for Manitoba with the Moose outscoring the Stars by a count of 9-5. 12 different Moose skaters, nine forwards and three defencemen, recorded at least a point over the course of the two-game series. Five players recorded multiple points in the set Austin Poganski (2G), Luke Johnson (1G, 1A), Jeff Malott (1G, 1A),  Dylan Samberg (2A) and Greg Meireles (2A). Manitoba has now scored 91 goals this season which puts it firmly in second place in the AHL’s Central Division.

Forward Haralds Egle recorded the game-winning goal with less than a second in a thrilling 5-4 win over Texas on Saturday night. Egle has four points (2G, 2A) through 12 games. The Saturday tally was his first AHL game-winning goal. Egle is now one point off matching his 25-game rookie total from the 2020-21 campaign.