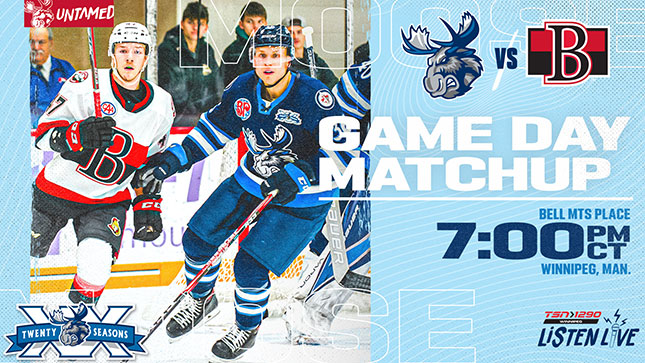 The Moose return home to open a four-game stand at Bell MTS Place with a matchup against the Belleville Senators. Manitoba looks to get back on a winning track following a three-loss road trip.

The swing closed out with a 6-2 loss to the Grand Rapids Griffins on Saturday. Logan Stanley opened the scoring with 10 seconds left in the first, but the Griffins responded with a pair of tallies early in the second. Kristian Vesalainen evened the game on his ninth goal of the season, but things got away from the Moose after that. The Griffins rattled off four unanswered goals, including three on the power play, to pull away. Moose defenceman Nelson Nogier knows his team will need to be better at managing the puck going forward.

“At this time of the year, when you’re playing any team, puck management seems to kind of be the key to the game,” Nogier commented following Saturday’s defeat. “When we stray away from managing the puck we find ourselves in trouble more often than not.”

Good news for the Moose is they’ve been strong at home this season with an 11-7-0, as opposed to their 7-15-0 road mark. Manitoba’s 11 wins at Bell MTS Place are tied for the third-most in the division on home ice. Part of the reason for that success is the Moose power play, which ranks third in the AHL with a 25.4 per cent success rate in friendly territory. The guys in antlers are coming off a successful 4-2-0 run on their previous home stand.

“It’s going to be good for our club to get back home,” added Nogier. “It’s going to be important that we string together some wins and just get back to playing the hockey we know makes us successful. That’s staying consistent and playing a solid 60 minutes.”

The Moose will have to be sharp tonight to defend their home ice. The Senators are the best road team in the AHL by points percentage with a 13-3-1-0 record away from CAA Arena. Belleville features a plus-23 goal differential on the road to go with their league-leading 141 goals through 38 games this season.

The Moose came away with a 2-1 victory the last time the two teams met. Mikhail Berdin made 38 saves to lead the Moose to what was their seventh straight victory. Emile Poirier scored the winner for the Moose late in the first peri0d. Since then, the Moose have posted a 8-14-0-0 record while the Senators own a 14-5-1-1 mark.

Tickets for tonight’s matchup, along with all four Moose home games this week, are available at moosehockey.com/tickets.

Coverage of the contest begins on TSN 1290, moosehockey.com/listenlive and AHLTV at 6:45 p.m. CT.