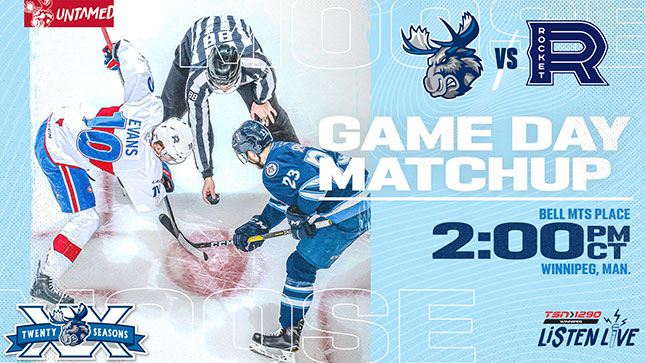 The Moose host the Laval Rocket today for Follow Your Dreams Day at Bell MTS Place. The Moose will wear limited edition indigenized jerseys which will be available for auction on the concourse and online following the game through NHL auctions. The Moose will also host performers from the Spirit Sands Singers, the North End Band with Morgan Grace, the Norman Chief Memorial Dancers, and the Canadian national anthem will be performed in Cree.

Manitoba is coming off a 3-2 victory against the Belleville Senators on Wednesday. Logan Shaw and Cameron Schilling scored 18 seconds apart in the final 30 seconds of the first period to give the Moose a 2-1 lead after 20 minutes. The Senators battled back to tie the game in the second. A scoreless third set the stage for Manitoba’s fourth overtime win of the season. Michael Spacek tucked away a Johnny Kovacevic rebound for the winner. It was Spacek’s second career overtime goal and his third game-winning tally of the season. The Pardubice, Czech Republic native also assisted on Schilling’s tally for a two-point evening.

The points are key for both clubs this weekend as they eye returns to their respective playoff races. The Moose sit two points back of the playoff line, while Laval is a single point behind Toronto for fourth in the North Division. Since the Rocket joined the league, the Moose hold a 5-2-0-1 mark against the Montreal Canadiens affiliate. That includes points in all four games at Bell MTS Place (3-0-0-1), but a 1-2-0-1 record last season. Moose head coach Pascal Vincent knows these out of division games present an opportunity to pick up points by any means necessary.

“We’re looking to get points. The game against Belleville, we go to overtime, the points they got don’t affect us much,” Vincent said following yesterday’s practice. “We’re looking for points. So every single game until the end of the season or until we secure a spot in the playoffs will be very important.”

The Moose defence looks a little different than it did for their games against Belleville. Cameron Schilling’s recall to the Winnipeg Jets leaves a large hole in their pairings. The Carmel, Ind. product leads Moose defenders with 19 points (5G, 14A) in 40 games, leads the whole team with 85 shots and ranks second with a plus-nine rating. Over the past week Manitoba has recalled defenceman Logan Shaw, who has appeared in three games with the club this season, and Charles-David Beaudoin who was a regular for the team the past two seasons. Moose defenceman Jimmy Oligny feels it’s an opportunity for someone else to contribute.

“Obviously Cameron is a huge piece”, said Oligny. “But it gives a chance to other guys to just step up and show the organization what they can do. I think it’s just a great thing.”

The Rocket have been streaky leading into their matchup against the Moose. Laval has dropped two straight, both on the road, following a five-game win streak, which was preceded by a run of five losses. Jake Evans leads the Rocket with 27 points (8G, 19A) in 40 games. Netminders Charlie Lindgren and Cayden Primeau have largely split the starts. Neither feature a save percentage above .900, but have goals-against averages of 2.67 and 2.86 respectively.

Tickets for today’s game are available at moosehockey.com/tickets. Coverage of the game on TSN 1290, moosehockey.com/listenlive and AHLTV gets going at 1 p.m. with Moose Weekly hosted by Austin Siragusa.