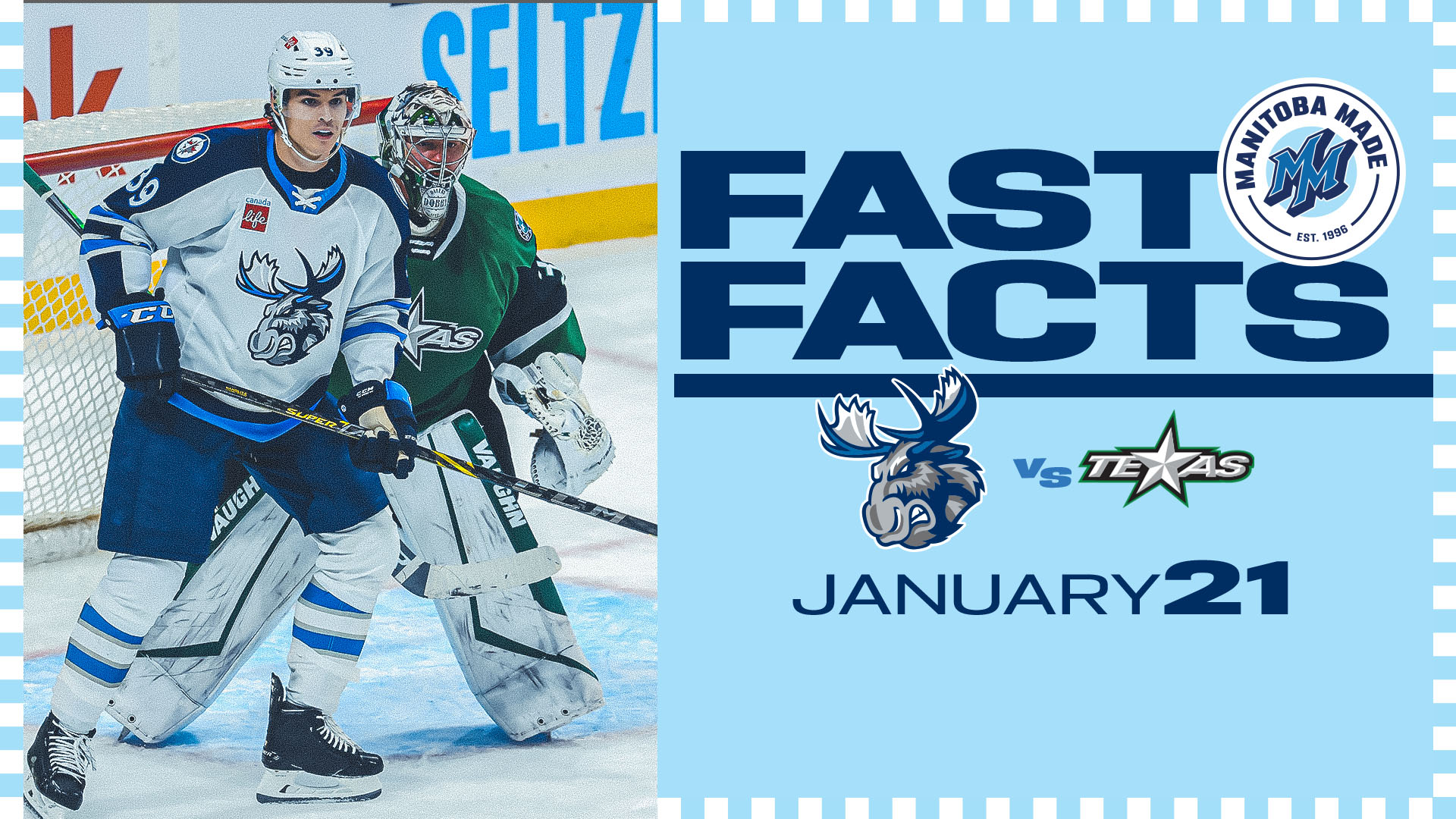 The Manitoba Moose continue their six-game home stand this afternoon when they welcome the Texas Stars to Canada Life Centre. The Moose split their previous two-game set with Chicago, falling 6-2 on Wednesday. The Stars come in winners of three straight and sit atop the Central Division. Manitoba holds a 2-1-1-0 record against Texas so far this season.

We’re going back to the dawn of the millennium today with 2000’s Day at Canada Life Centre. Celebrate the decade that saw the rise of XBOX, Youtube and fashion choices we still regret. The first 3,000 fans through the doors receive a Moose hat. Tickets are available at MooseHockey.com/TICKETS.

Declan Chisholm notched a pair of assists in Manitoba’s loss against Chicago. The contest marks the sixth time this season the defenceman recorded a multi-assist game. When Chisholm tallies at least two assists, the Moose hold a record of 5-1-0-0. Chisholm sits second in scoring on Manitoba with 26 points (3G, 23A) in 35 games and ranks second on the Moose blue line with three markers on the power play. In addition, Chisholm, a fifth round pick of Winnipeg in 2018, has 55 assists in his Moose career, which pushes him past Kent Fearns for 10th all-time among antlered defencemen.

Leon Gawanke scored a goal in Manitoba’s weeknight game against Chicago. The marker gives the defenceman 86 career AHL points (23G, 63A) and nudges him past Cameron Schilling for seventh all-time in points by a Moose defender. Gawanke, a fifth round pick of Winnipeg in 2017, has 17 points (8G, 9A) in 33 games and has notched half of his tallies on the man-advantage. That mark ties a career-high for Gawanke from this past season. Gawanke’s 17 points from the blue line puts him second on the squad this season. The Berlin, Germany product currently holds a career-high 9.5% shooting percentage.

When the Moose play a game between the hours of 2 p.m. and 4 p.m., the squad has a combined record of 8-2-1-0 for a total of 17 points. Over that span, when the Moose are at home, the team has outscored their opponent by a mark of 34-26. Manitoba owns six goals on the man-advantage over that stretch, while only surrendering four. Manitoba has also been dangerous when on the penalty kill and has recorded two shorthanded markers in that time. When playing in an afternoon contest, the antlered ones are led in points by defenceman Declan Chisholm, who has nine points (1G, 8A). Between the pipes, both Arvid Holm and Oskari Salminen have four wins apiece, with Holm sporting a 4-0-1 record to go with a 2.14 goals-against average and .936 save percentage.

Brayden Burke netted his second goal in as many games when Manitoba played Chicago on Wednesday. The forward, who was signed to a professional tryout by Manitoba in early January, has recorded five points (2G, 3A) in seven games since joining the Moose and is currently riding a three-game point streak. The Edmonton, Alta product, who is set to play in his 200th AHL game his next appearance, has tallied 134 points (44G, 90A) and owns a career plus-six rating.

Forward Henri Nikkanen tallied an assist in Manitoba’s loss on Wednesday. The helper gives the pivot nine points (4G, 5A) in 35 games. Nikkanen, a fourth round pick of the Winnipeg Jets in 2019, is tied with Dean Stewart for points by a Moose rookie. The Mikkeli, Finland product is currently firing at a 14.3% shooting percentage and has 28 shots this season.