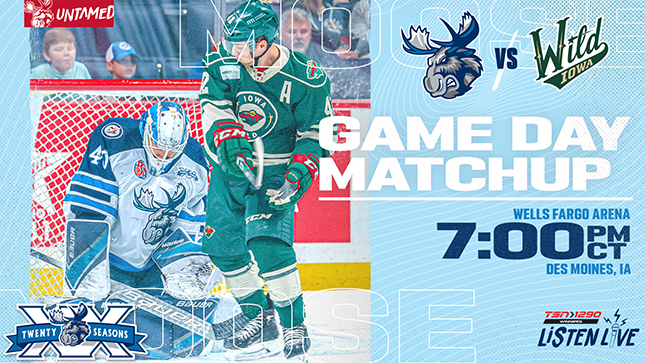 Much like the Winnipeg Jets, the Moose will need to battle through a back-to-back set to reach the all-star break. The guys in antlers are in Des Moines, Iowa to take on the Wild tonight and tomorrow as they look to climb back into the playoff picture in the Central Division.

They’ll have plenty of opportunity to gain ground. Tonight’s contest kicks off 10 straight games within the division for Manitoba. In fact, the Moose will only play three more games outside the Central Division the rest of the season. Manitoba holds a 16-15-0-0 mark in divisional play. As a part of that schedule, the Moose face the top two teams in their division, Milwaukee and Iowa, a total of 12 times. Forward C.J. Suess knows these divisional clashes will be key to the Moose reaching the post-season.

The last time the Moose and Wild clashed was back on Oct. 18 and 19 at Bell MTS Place. The Wild grabbed a pair of two-goal victories. Both contests were separated by one goal until empty net tallies late in the game. The Oct. 18 clash was the tightest affair with the Moose battling back from a 4-2 deficit to tie the game in the third. A late Sam Anas power play tally lifted Iowa to the eventual win. Seth Griffith led the way for Manitoba with three points in the two-game set in Winnipeg while Sam Anas paced the Wild with five points.

Despite not having faced Iowa in three months, forward Skyler McKenzie feels the Moose know what to expect from their opponents tonight.

“We have enough video for sure, and we know the way they play. For guys that were here last year too, you get pretty familiar with teams in your division,” McKenzie explained. “So just because we haven’t played them (in 2020), doesn’t mean we’re not too familiar with them. Having said that, they’re a good team over there, and we’re going to have to be sharp if we want to beat them.”

The Moose come in having split their last four outings, all against the North Division. The finale of that four-game Canadian content home stand saw the Moose power their way to a 5-1 win against the Laval Rocket. After being shut out 3-0 the night before, Manitoba scored goals at even strength, shorthanded and on the power play. Kristian Reichel opened the scoring in the first. C.J. Suess, JC Lipon and Michael Spacek struck in the second to break the game open. Cole Maier added one more goal in the third to remove any doubt. Mikhail Berdin was strong in the crease, turning aside 40 shots for the win.

Meanwhile Iowa has points in eight of its last 10 games, including a three-game point streak. The Wild dropped a 4-3 shootout decision to the Grand Rapids Griffins on Wednesday as their last action. Gerry Mayhew and Sam Anas lead the Wild with 45 points each and rank second and third respectively in league scoring. Mayhew’s 29 goals, in just 36 games, on the campaign are five tallies clear of second-place Reid Boucher.

Coverage of tonight’s game on TSN 1290, moosehockey.com/listenlive and AHLTV gets going at 6 p.m. CT. Austin Siragusa leads things off with Moose Weekly and the pre-game show takes over at 6:45 p.m. before a 7 p.m. puck drop.