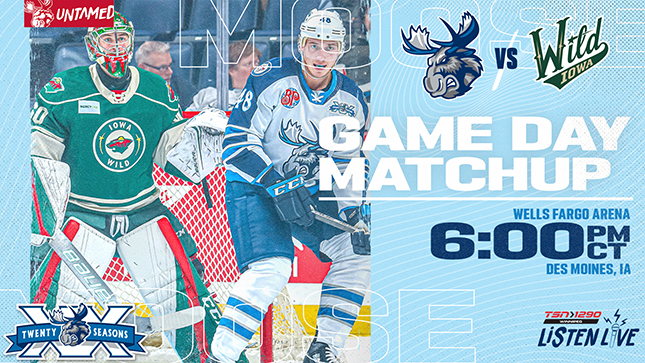 The Moose look to hit the AHL All-Star break on a winning note as they go up against the Iowa Wild for the second straight night. Manitoba is looking for an offensive spark after being shut out by the Wild last night in a 1-0 defeat.

The Moose came out firing last night, outshooting their hosts by a 17-6 margin in the first period. They kept it up into the second with a 27-13 edge on the shot count. Unfortunately for Manitoba, the score still sat 0-0 through 40 minutes. Nico Sturm scored 3:57 into the third, batting a puck out of the air and past Mikhail Berdin, for the only goal of the game. Berdin made 28 saves on 29 shots in the contest.

“They did a good job in front of their own net, limiting second and third opportunities which makes it tough,” said forward Cole Maier following the defeat. “Especially since we had a hard time beating their goalie clean so that made it tough for us to get one.”

Manitoba will try to keep a trend running tomorrow as the Moose are 4-1-0 in their last five games when playing the second game of two straight against an opponent. Three of those wins have come after losses in the previous outing, with two coming the next day. Three of their four victories in the second game have come by one-goal margins, including two overtime victories. While one win and their loss were by four-goal spreads. The Moose are 3-2-0 in games following the team being shut out.

“I think we have to stick to what we brought tonight,” Maier continued. “I thought it was a pretty good effort. Just a little battle here or there, maybe to get to the net, would go a long way for us.”

Mikhail Berdin stood out for the Moose, making 28 saves. He wasn’t overly busy in the first and second, just facing 13 shots, but made some big stops on some quality chances along the way. In the third, he kept the Moose within one, stopping 15 of 16 shots against. It was the second straight game the Ufa, Rus. native allowed just one goal.

The Moose have been defensively sound over their past four games, allowing just seven goals in that span. Going back further, Manitoba has allowed just one goal in four of its last 10 games, two or less in five of those 10, and three or less in seven of the segment. The Moose are averaging 2.7 goals against per game over that span. That’s down from 3.1 against per game over the full balance of the season. When compared to the rest of the league for the season, Manitoba’s 10-game stretch would rank in the top-10.

One of the factors driving that success on the defensive side of the puck has been the Moose penalty kill.  During the 10-game span, Manitoba has successfully killed off 38 of 45 penalties against. That’s good for a 84.4 per cent kill rate. Of note, the Moose surrendered three of the seven power play goals against on Jan. 11 in Grand Rapids. In the other nine games, the Moose were 34/38 down a man, successfully turning aside 89.5 per cent of penalties against.

The Moose try to continue that stingy play against the Wild tonight leading into the all-star break. Coverage of tonight’s game on TSN 1290, moosehockey.com/listenlive and AHLTV gets going at 5:45 p.m.