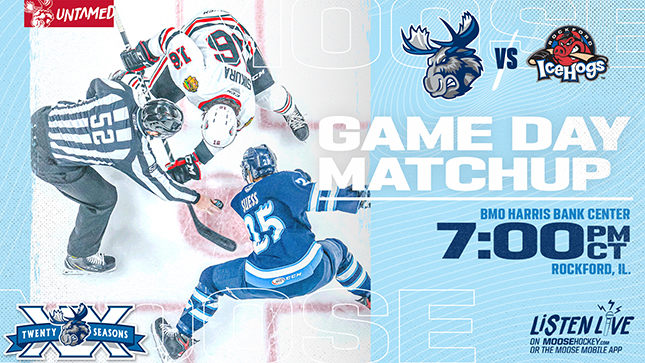 The Moose come out of the all-star break tonight with a road matchup against the Rockford IceHogs. Manitoba has 30 games left on the schedule to climb back into a playoff spot. The club will have plenty of opportunity to do so with all but three of those games against divisional opponents. Forward Seth Griffith feels the Moose need to bring their top game every night from here on out.

“We’ve got to have our best foot forward every night,” Griffith explained following the team’s morning skate. “We need to come to play 60 minutes every single night. We can’t afford to take any days off, and the four days hopefully rejuvenated and refreshed us and we’re ready to go.”

The opening portion of Manitoba’s chase for a playoff berth starts with six straight games against Illinois-based competition. Following tonight’s game against Rockford, the Moose play three consecutive games against Chicago, followed by a back-to-back against the IceHogs. Four of those contests come on home ice after this brief two-game trip.

The break came at a good time for the Moose. Besides the club just needing a few days away from the rink, it also gave players dealing with injuries time to work their way back without missing games. Defenceman Logan Stanley was sidelined for the past two games against Iowa and though he won’t play tonight, was happy he didn’t miss any games over the break.

“You never want to get hurt, but I guess it was good timing with not having games over the all-star break,” said Stanley. “Getting back to 100 per cent and feeling healthy was my main goal.”

Manitoba holds a 3-2-0-0 record against Rockford this season, and a 1-2-0-0 mark at BMO Harris Bank Centre. The IceHogs claimed the previous meeting between the teams in a 4-1 defeat of the Moose in Rockford on Jan. 8. Jacob Nilsson led the way for the IceHogs with a goal and two assists.

Both teams come into the game looking to snap out of losing streaks. Manitoba dropped two straight to the Iowa Wild, both by one goal, leading into the break. Meanwhile Rockford has lost four straight and eight of its last 10 contests.

Coverage of this evening’s tilt on moosehockey.com/listenlive and AHLTV gets going at 6 p.m. CT with Moose Weekly hosted by Austin Siragusa. Puck drop is slated for 7 p.m.