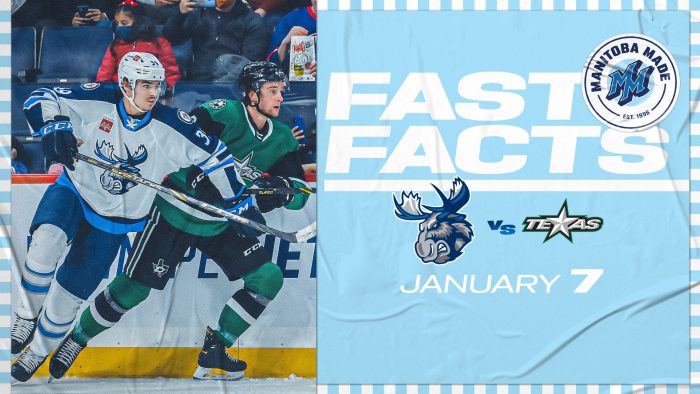 The Moose head out on the road for the next couple weeks and it starts this evening in Texas. Manitoba tries to get back in the win column after falling in a shootout on Tuesday while the Stars are playing their first game since Dec. 18. Coverage on CJOB.com/sports, the Manitoba Moose App and AHLTV gets going at 6:45 p.m. CT. Tonight’s game is the AHLTV Free Game of the Week.

Forward Jeff Malott tallied his eighth goal of the season, a power play marker, on Tuesday against Iowa. The goal gave Malott sole possession of the team goal-scoring lead. It’s familiar territory for Malott who led the Moose with 14 goals during the 2020-21 campaign, and posted 21 goals in 59 games during the 2021 calendar year. After going goalless for his first nine games, Malott has his eight goals in the past 18 games. Overall, the Burlington, Ont. product has 14 points (8G, 6A) in 27 contests. The Cornell University alum joined the Moose as a free agent in 2020-21 and signed a one-year contract with the Winnipeg Jets during the past off-season.

Tonight’s game has been a long time coming as the Moose make their return to H-E-B Center. Manitoba’s previous visit to Cedar Park came back on Dec. 13/19, a whopping 756 days ago. The two teams have met just twice since then with the Moose claiming 4-1 and 5-3 wins on Nov. 27 and 28 respectively back in Winnipeg. The teams have met 35 times in their history, with the Moose posting a 10-16-1-1 mark against the Stars.

On the Road Again

The Moose hit the road for six games as part of one of their longest swings of the season. With a rescheduled game in Iowa added to the slate, the team will be on the road from Jan. 6-19, with the final game of the trip going Jan. 19. The Moose are 6-7-1-0 in 14 road contests this season, having lost three straight away games coming into tonight’s matchup. Despite the sub-.500 record on the road, the Moose have outscored their opposition by a 40-36 count.

The Moose defence features seven Winnipeg Jets draft picks and the highly-touted crew hasn’t disappointed. The Manitoba defence has combined for 21 goals on the season, accounting for 26 percent of all Moose goals this season. That is the highest percentage of any team in the AHL. Manitoba’s 21 goals from defencemen ranks second in the league with Colorado leading the way at 22 goals. The Moose are one of just two teams with four defenders with 12 or more points on the campaign. Leon Gawanke leads the defence, and the entire team, with 17 points (4G, 13A).

Forward Mikey Eyssimont recorded a primary assist for the second consecutive game on Tuesday. Eyssimont is up to eight helpers on the season, with seven of those coming in the past 10 games. The Littleton, Col. has 14 points (6G, 8A) in 20 games, just three points off his 40-game total from last season.