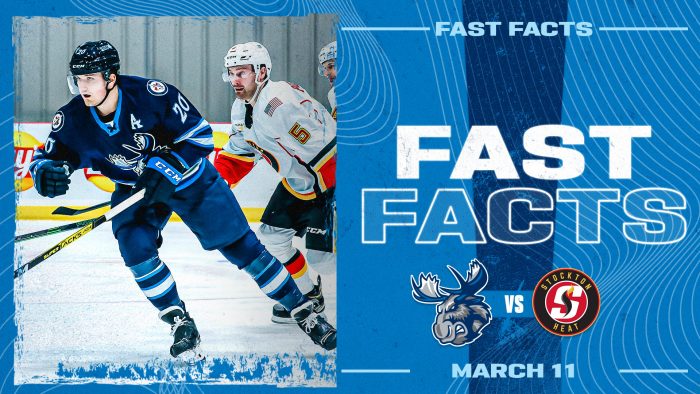 The Moose have points in four straight games, but have been on the wrong side of back-to-back overtime losses to Stockton. It’s been an exciting series so far, and Manitoba looks to get back in the win column as the two clubs compete on consecutive nights at Bell MTS Iceplex. Watch the game with a subscription to AHLTV or listen on cjob.com/sports and MooseHockey.com/LISTENLIVE. Coverage starts at 5:45 p.m. CT, with puck drop scheduled for 6 p.m. CT.

March 11 marks one year since the NHL announced their season was paused due to Covid-19. The AHL followed suit the following day. Heading into the pause, the Moose had won three of their last four contests and had embarked on a road trip to Milwaukee before being asked to return home.

Manitoba’s lineup gained two players last night who returned from injury. Kristian Reichel who kicked off the 2020-21 season with the Moose and posted two goals in seven games, last appeared in Manitoba’s contest against Laval, Feb. 26. The forward played in his 100th career AHL contest, Feb. 24/21 with the Moose. Marko Dano also joined the lineup tonight, making his 2020-21 debut in antlers. Dano re-signed with the franchise during the offseason, having suited up for the Moose during the 2016-17 and 2018-19 seasons.

Jeff Malott scored his seventh goal of the season early in the second period of last night’s game against the Heat. Each of the past four seasons, Malott topped out at six goals with Cornell University. His seven goals in 12 games this season are tied for third in the AHL, and tied for the lead among rookies. Malott has goals in three consecutive games, scoring four times in that span. His three-game goal streak is tied for the seventh-longest in the league this season. With both Malott and Nathan Todd at seven goals, the Moose are the only team in the AHL with two players ranked in the top-10 in goal scoring.