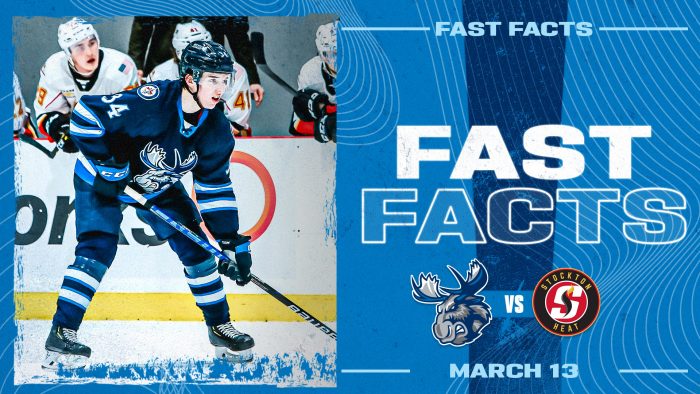 The Moose try to finish their four-game series against the Stockton Heat on a high note with an afternoon matchup at Bell MTS Iceplex. All three games in the set have been decided by just one goal between the evenly matched clubs. Watch the game live with a subscription to AHLTV or listen for free at cjob.com/sports and MooseHockey.com/LISTENLIVE. Coverage gets rolling at 1:45 p.m. CT with puck drop slated for 2 p.m. CT.

Stay in the Fight

Having lost the previous three games to Stockton, each by one goal, Moose hold a 6-7-2-0 record through 15 games this season. In their nine losses, Manitoba has fallen short by just one goal on six occasions. Only one of the team’s nine losses has been by more than two goals. That defeat came back on Feb. 16 against Toronto. The Moose, along with the San Diego Gulls, lead the AHL by having played in eight one-goal games. Manitoba also leads the league in games decided by two goals or less with 13 of Manitoba’s 15 outings separated by two or less goals.

Forward Kristian Vesalainen returned to the Manitoba lineup on Thursday night. The Helsinki, Finland native was assigned to the team by the Winnipeg Jets on March 4, but missed the next four games due to injury. Vesalainen recorded one shot on goal in his return. The 2017 first round pick appeared in 60 games for Manitoba last season, tallying 30 points (12G, 18A) and tied for the Moose lead with six power play goals. Prior to joining the Moose this season, Vesalainen posted one assist in eight games with the Winnipeg Jets and racked up eight points (4G, 4A) with HPK Hameenlinna in Finland.