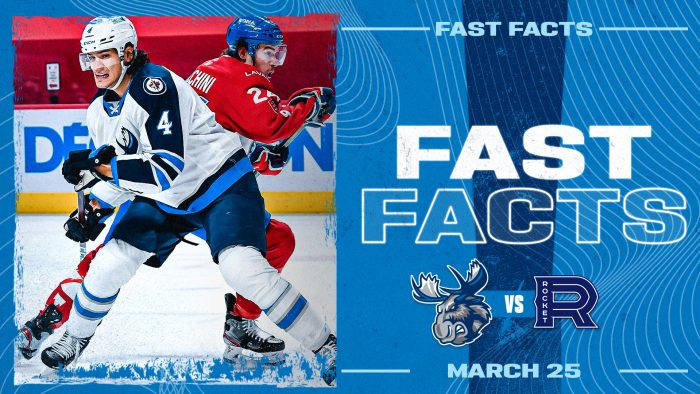 It’s been 11 days since the Moose last hit the ice in game action, but the team gets back to it tonight against the Laval Rocket. The Moose split their previous four-game series against Laval, picking up a win in overtime and a win in regulation at Bell Centre in Montreal. The Rocket come in flying with wins in six straight games, while the Moose have points in five of their last six outings. The action gets going at 6 p.m. CT at Bell MTS Iceplex. You can listen in on cjob.com/sports and MooseHockey.com/ListenLive or watch with a subscription to AHLTV. Coverage begins at 5:45 p.m. CT.

During Manitoba’s most recent three games against the Heat (March 10-13), the Moose turned away the Stockton power play on nine of 10 advantages. Stockton started those three games an impressive 42.9% on the power play and dropped down to 34.2%. The Moose penalty kill has been perfect in nine of 16 games so far this season. In their previous four-game series, the Moose killed off all five Laval Rocket power plays.

The Moose kicked off the 2020-21 season with a rigorous schedule and suited up for 16 games in 27 days. Manitoba has since had 11 days off from game action, last having played the Stockton Heat, March 13. The Moose have a few more long breaks between contests during the 2020-21 campaign. Following the club’s series against the Laval Rocket (March 25-30), the Moose have seven days off before facing the Belleville Senators. After Manitoba’s series against the Senators, the team takes nine days away from game action before heading on their final road trip of the season.

The Winnipeg Jets announced on March 17 that the club re-assigned Eric Comrie and Ville Heinola to the Taxi Squad. Comrie appeared in one game for the Moose, March 13 vs. Stockton and collected a victory. In recording his 84th win with the Moose, the netminder tied Cory Schneider for the franchise lead. Heinola has posted 10 points (4G, 6A) in 16 games for the Moose during the 2020-21 season. Heinola is currently tied for the lead in points among AHL rookie defenceman.

A Game of Firsts

Dylan Samberg recorded his first career AHL assist, March 13 against Stockton. The Hermantown, Minn. product marked the primary assist on David Gustafsson’s first period tally. Samberg was a second round pick of the Winnipeg Jets in the 2017 NHL Draft. Also during Manitoba’s contest against the Heat, Peter Krieger appeared in his AHL debut for the Moose. The forward recorded one shot during his debut. Krieger kicked off the 2020-21 season with the ECHL’s Indy Fuel where he recorded 16 points (6G, 10A) in 20 games.