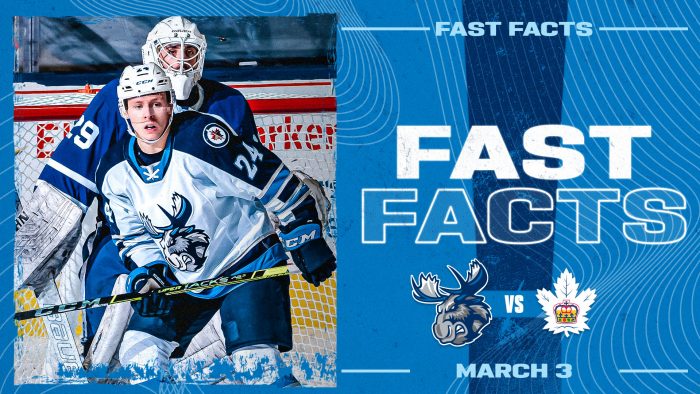 The Manitoba Moose are in Toronto for the second of two matchups against the Marlies tonight. Monday’s contest saw the Maple Leafs’ AHL affiliate come away with a 4-2 victory. The Moose made a late push, nearly erasing a three-goal deficit, but fell just short. Now they look to halt a three-game losing skid and get back up to the .500 mark in the rematch. Tune into the game at MooseHockey.com/LISTENLIVE, cjob.com/sports or watch with a subscription to AHLTV.

The Moose have recorded 23 goals on the 2020-21 season thus far. 11 of those tallies have come in the third frame accounting for 47% of Manitoba’s goals. Six of the tallies were scored during even strength play while three were recorded during a Moose man-advantage (twice due to a power play opportunity, once with an extra attacker). Only two of Manitoba’s third period tallies were scored on an empty net. The Moose hold a 4-3-0-0 record when scoring in the third period during the 2020-21 season. The club is 2-2-0-0 when entering the final frame tied with its opposition.

Nathan Todd was the first Moose player to reach 10 points (4G, 6A) on the 2020-21 season with his assist on Jeff Malott’s third period tally Monday night against Toronto. The forward reached the 10-point mark in nine games. During his ECHL career with the Brampton Beast, the fastest that Todd recorded 10 points (also four goals and six helpers) was in six games during the 2019-20 campaign. Last season for the Moose, Seth Griffith and Jansen Harkins both reached the 10-point mark on Nov. 3/19 against the Grand Rapids Griffins with the milestone coming 10 games into the season.

Climbing Back Into It

The Moose have scored seven times when trailing in games this season. During Manitoba’s 4-2 loss against the Toronto Marlies on Monday night, the Moose were handed a 3-0 deficit heading into the third period. However, Manitoba scored two goals during the final frame and brought the game within one. During Manitoba’s 3-2 overtime victory, Feb. 22 against the Laval Rocket, the Moose were trailing heading into the third period. However, with Jeff Malott’s goal 15 seconds into the final frame and Mikhail Berdin’s turning away all 10 of Laval’s chances, the game was decided in overtime by Ville Heinola.

Jeff Malott scored his third goal of the season in Manitoba’s loss against the Marlies on Monday. The forward recorded three shots on net during the contest. Malott has made three or more shot attempts in three games this season and scored a goal in each contest. There has only been one game this campaign where Malott took a shot during the contest and didn’t eventually find the goal column.