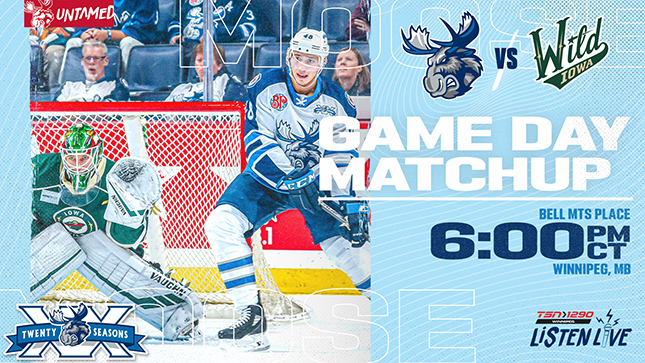 The Moose host the Iowa Wild this evening as they try to push their modest winning streak to three games. It’s Gender Equality Night at Bell MTS Place as the Moose celebrate girls and women in hockey. The team is also giving away packs of Upper Deck hockey cards to the first 3,000 fans through the doors tonight.

Despite the Wild holding a four-win edge in the season series and sitting well clear of the Moose in the standings, the teams have been tightly matched in their season series so far. All four games have been decided by two goals or less,  and the two games that did have a two-goal difference required empty net goals to get there. The last time the teams clashed saw the Moose nearly pull off a late comeback. Trailing 3-0 with eight minutes to go, JC Lipon got Manitoba within two. Manitoba suffered some bad luck on a terrible roll from Kyle Rau’s clearing attempt that found the empty net with 2:30 left on the clock to restore the three-goal Iowa lead. Then the Moose got goals from Kristian Vesalainen and Skyler McKenzie just seconds apart to pull within one. Manitoba couldn’t complete the comeback and fell 4-3 in regulation.

Comebacks have been something of a specialty for the Moose over the past five games. All three of Manitoba’s wins have come from third period rallies, including last weekend’s two overtime triumphs against the Chicago Wolves. Sunday’s game saw the Moose open up a 1-0 lead early on Seth Griffith’s 21st goal of the season. Chicago scored the next three goals, including two shorthanded tallies, to build a two-goal edge. Kristian Vesalainen got Manitoba back within one before the end of the second, and Leon Gawanke tied the game on the power play in the third. C.J. Suess provided the game-winner midway through overtime.

Griffith was in on all four Moose goals, adding three helpers to his first period tally. It was the second time this season Griffith recorded a four-point game as the veteran forward pushed his team-leading point total to 41 on the season. Griffith getting hot would be good news for the Moose and the Wallaceburg, Ont. product has points in four of his last six games with seven points (2G, 5A) in that span. Griffith finished the 2018-19 campaign on a tear with 18 points (8G, 10A) in his last 21 games.

Daniel Brickley could make his Moose debut tonight. The defender was acquired this week in a swap of loans as the Los Angeles Kings reassigned Brickley to the Moose. Heading the other way was forward Michael Spacek who will join the Ontario Reign for the remainder of the season. Both Brickley and Spacek remain tied to the Kings and Jets respectively. It hasn’t been an easy season for Brickley. The second-year pro missed three months of the campaign due to an illness and returned to the Ontario lineup recently. He has two assists in 11 games this season and is looking forward to making a good impression on his new teammates.

“(My goal is) to help the team. I mean, I want to help the team however I can and win with these guys,” said Brickley following yesterday’s practice. “I mean, I’m loaned here, technically I’m still owned by the Kings, but wherever I’m put I just want to do the best I can and help the guys. That’s the bottom line.”

The Iowa Wild come in having dropped two straight games for the first time since early January. Their last defeat was a 5-1 loss to the San Jose Barracuda, wrapping up a swing through California. Iowa has played six of its last seven on the road with three more road games (including tonight) to go on a six-game swing. The Wild will be without two of their top players tonight as the AHL’s leading goal-scorer, Gerry Mayhew, is up with Minnesota and goaltender Kaapo Kahkonen suffered an injury last week. The Wild are comfortably seated second in the Central Division, seven points back of Milwaukee and 18 points up on Grand Rapids.

Tickets for tonight’s game are available at moosehockey.com/tickets or through the Moose Mobile App. Coverage of this evening’s tilt gets rolling at 5 p.m. CT on TSN 1290 and moosehockey.com/listenlive. AHLTV will join in shortly before puck drop at 6 p.m.