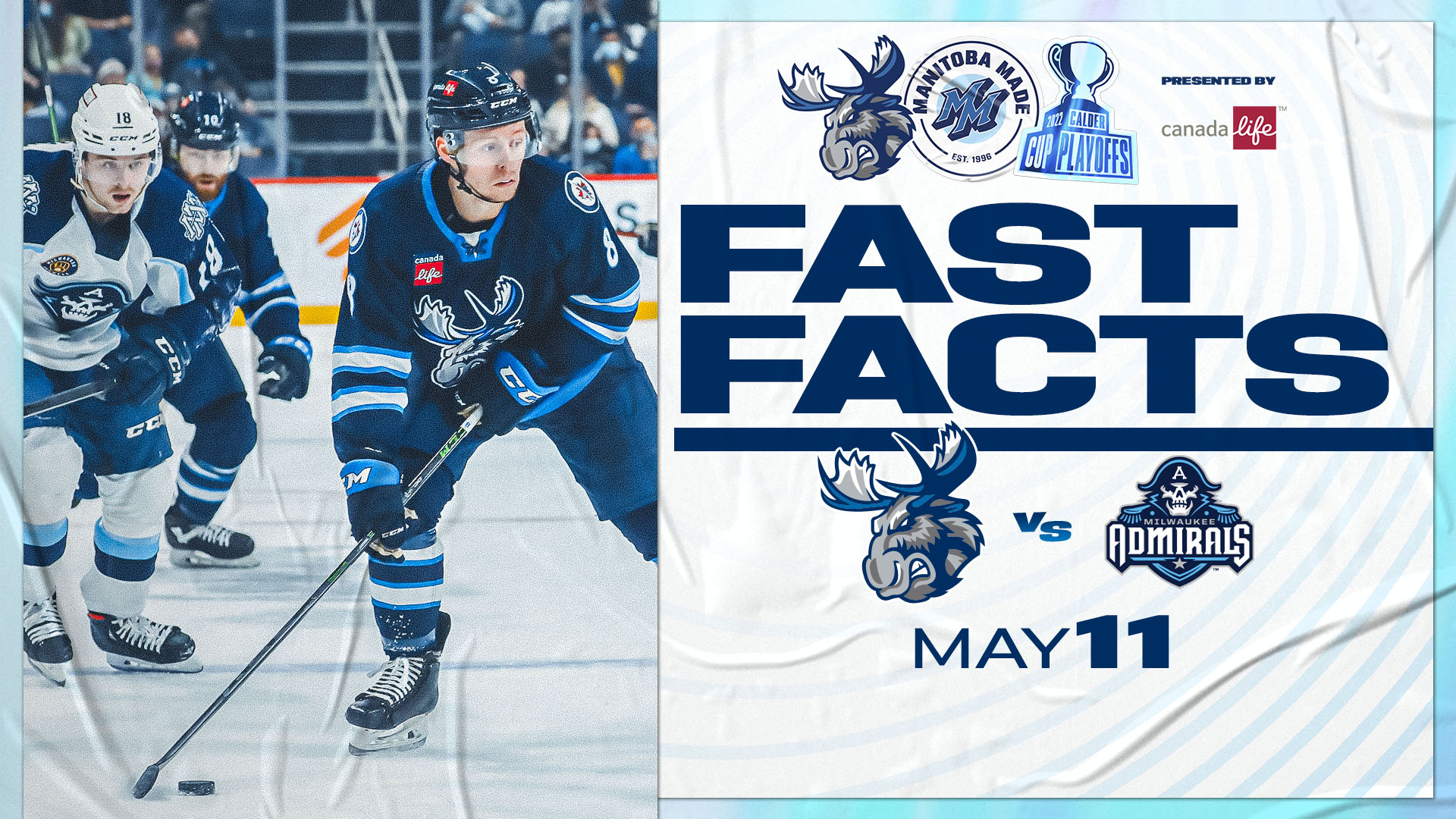 The Manitoba Moose face their first elimination game of the 2022 Calder Cup Playoffs tonight. Manitoba returns home following 3-2 and 2-1 losses despite outshooting the Milwaukee Admirals by a combined 86-37 the first two games of the best-of-five series. Admirals netminder Devin Cooley was the story of the first two games, stopping 83 of the 86 shots fired his way. Meanwhile, defenceman Declan Chisholm factored on every Moose goal with three points (1G, 2A). Tickets for tonight’s Game 3 matchup at 7 p.m. are available at MooseHockey.com/TICKETS. Broadcast coverage of tonight’s action begins at 6:30 p.m. on 680 CJOB, AHLTV and the Manitoba Moose App. It will also be broadcast on TSN3 and TSN.ca starting at 7 p.m.

Leading from the Blueline

Leon Gawanke recorded an assist for the second straight game in Saturday nights loss against Milwaukee. The defenceman tallied an assist in both Moose playoff contests. Gawanke is also tied for first on the team with partner Declan Chisholm with a plus-three rating. The Berlin, Germany product led the Moose blueline with 36 points
(10G, 26A) in 65 games and finished the 2021-22 campaign fourth in overall Moose scoring.

Morgan Barron scored the only Moose goal of the night in the Game 2 loss on Saturday. The tally was the forward’s first Calder Cup Playoffs goal and his second in a Moose uniform since coming over as part of the Andrew Copp trade with the New York Rangers. Barron made it into five games with the Moose in regular season where he registered two points (1G, 1A) before being recalled by Winnipeg. The forward ended his time in the NHL with four points (2G, 2A) in 14 games for the Jets, including a multi-point performance in the Jets regular season finale against Seattle.

Back Against the Wall

The Moose find themselves in a bind heading into a pivotal game three on Wednesday evening. Manitoba trails the best-of-five series 0-2 and needs to win three straight in order to stay alive in the Calder Cup Playoffs. The Moose won three games in a row seven different times this season. Two of those streaks came exclusively at home, with the Moose outscoring their opposition by a count of 25-13 in the process. The franchise holds an 18-16 record in elimination games throughout its history. Manitoba previously won three straight elimination games during the 2001 IHL Playoffs against Houston and the 2011 Calder Cup Playoffs against Lake Erie (now Cleveland). Both came in best-of-seven series when trailing 3-1.

Show me the Numbers!

Manitoba plays its first home game of the playoffs on Wednesday night. The Moose finished the regular season with a 25-9-0-2 record at Canada Life Centre. That was good for a franchise-record .722 points percentage and the 25 wins tied for the most in franchise history. When Manitoba battled Milwaukee at home, the club finished with a mark of 3-3-0-0 and netted 20 goals while giving up 21 to Milwaukee. All-time, the Moose hold a 44-40 record in 84 home playoff games.

Declan Chisholm recorded a third period assist in Manitoba’s 2-1 loss on Saturday in Milwaukee. The defencman has tallied three points (1G, 2A) in two playoff contests and leads the team in points. The Bowmanville, Ont. product is also tops on the squad, along with defence partner Leon Gawanke, with a plus-three rating through the pair of games.