Fast Facts: Moose at Belleville – May 14 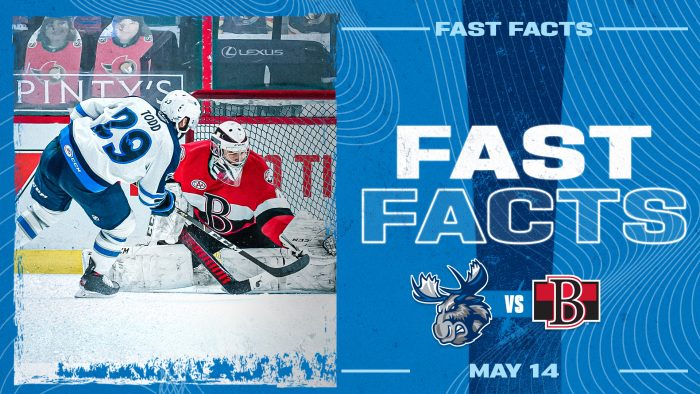 The Manitoba Moose and Belleville Senators open a three-in-three set tonight at Canadian Tire Centre in Ottawa. The run of three games in three nights marks the end of the season for the Moose. Manitoba can clinch the season series against the Senators with a win tonight. Listen to the game on cjob.com/sports and MooseHockey.com/ListenLive or watch with a subscription to AHLTV.

It’s a Long Way to the Top

Despite losing in a shootout to the Senators on Tuesday, the Moose saw their point streak reach an impressive 12 games. That mark matches the Laval Rocket for the longest point streak in the AHL this season. With a win or loss in extra time tonight, the Moose can take over top spot for the season and match the second-longest point streak in franchise history. The 2020-21 edition of the Moose won’t be able to match the longest run in the team’s history as they won’t have enough games to reach the 16 games posted by the 2017-18 Moose. One key could be to watch the shot-count. All six times the Moose hit 40 shots this season, they have recorded a point with a 4-0-0-2 mark. The team’s current streak started on a 49-shot game against Belleville.

Forward Cole Perfetti’s season is done with the Moose as the rookie heads off to join Team Canada for the upcoming IIHF World Championship in Riga, Latvia. Perfetti impressed in his first professional season, posting 26 points (9G, 17A) in 32 games with the Moose. He leaves the team ranking second on the club in points and was sixth in league rookie scoring at the time of his departure. The Whitby, Ont. product was recognized by the AHL as the CCM/AHL Rookie of the Month in April, making him the first Moose forward to ever receive the honour. Perfetti led the league’s rookies with 13 points (4G, 9A) in nine games and recorded 12 primary points in the month.

Nathan Todd’s impressive season hit a new milestone on Tuesday. The Moose forward racked his 11th goal and 30th point of the season, in his hometown. The Ottawa product reached the 30-point plateau in just 33 games, just five games slower than Winnipeg Jets forward Jansen Harkins, who was the first Moose to 30 points last season. Todd leads the Moose in assists (19) and points, and enters tonight’s action tied for 13th in AHL scoring. He has four points (2G, 2A) in his past two games and has seven points (3G, 4A) in seven games against Belleville this season.

Defenceman Dylan Samberg has found his offensive touch on this road swing. The rookie has points in four consecutive games, his first professional point streak, while recording four points (1G, 3A) in that span. Samberg opened the streak by scoring his first professional goal on May 6 in Toronto and has assists in every game since. The Winnipeg Jets second round pick in 2017 has seven points (1G, 6A) in 29 games this season. Prior to turning pro, Samberg posted 53 points (9G, 44A) in 109 NCAA games with the University of Minnesota-Duluth.

Forward C.J. Suess scored his eighth goal of the season Tuesday night. The power play tally was his second power play strike of the campaign. Suess has been extremely consistent for the Moose over his last eight games, recording goals in four of those contests and points in five of the eight outings. The Forest Lake, Minn. product has 14 points (8G, 6A) on the campaign.