Fast Facts: Moose at Belleville – May 15 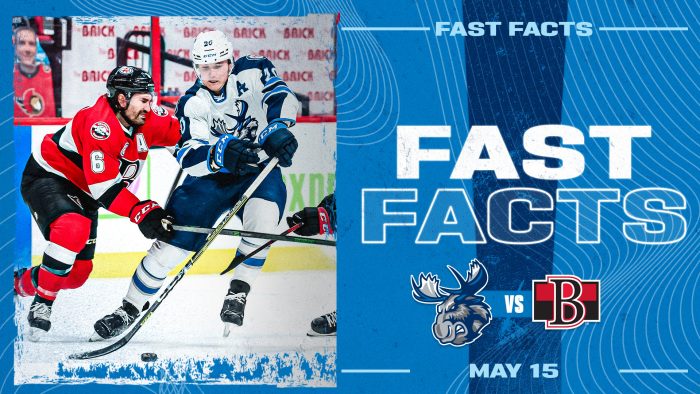 The Manitoba Moose pushed their point streak to 13 games last night. Unfortunately for the antlered ones, it came in a 3-2 overtime loss to the Belleville Senators. Manitoba’s 13-game point streak is the longest in the AHL this season, and tied for the franchise’s second longest all-time. It’s the fourth time in team history the club recorded points in 13 or more consecutive games. Listen to tonight’s action on 680 CJOB, cjob.com/sports and MooseHockey.com/ListenLive or watch with a subscription to AHLTV.

Another Notch in the Goal Column

Forward Jeff Malott scored his 14th goal of the season yesterday night. Malott leads the Moose in goals and is tied for the club lead in power play tallies. The Burlington, Ont. product is one of eight players tied for eighth in the league in goals. He’s also one of four players tied for the rookie lead in goals. Malott is tied for sixth among AHL rookies with 70 shots on goal. His 14 goals are the most by a Moose rookie since Mason Appleton (22), Michael Spacek (17) and Sami Niku (16) all cleared the mark. However, Malott’s 0.44 goals per game is 0.15 clear of Appleton’s 0.29 goals per game from that campaign. Malott is the third player on the Moose this season to reach 20 points.

Getting a Head Start

As the Moose continue to rack up points over their 13-game point streak, one thing remains constant. Manitoba gets on the board first. The Moose have scored the game’s first goal in 12 consecutive games dating back to April 10. The last team to score first against the Moose were the Belleville Senators on April 8 in Winnipeg. Jeff Malott leads the Moose, and sits tied for third in the league, with four ‘first goals’ on the season, including the opening tally last night. The Moose are tied for second in the AHL with 22 ‘first goals’ on the season. They hold a 14-5-0-2 record when scoring the contest’s first marker.

Forward Haralds Egle has points in back-to-back games for the second time in his first professional season. Egle recorded his first AHL assist on Tuesday and followed it up with his fourth goal of the campaign last night. The Latvian winger has points in three of his four games played this month, recording three points (2G, 1A). Egle seems to a have a groove when it comes to the Senators. Three of his five points on the campaign are against Belleville, including his first AHL goal back on March 6 in Ottawa. With four goals on 23 shots, Egle ranks second in shooting percentage (17.4%) among Moose forwards with at least 20 shots.

Good Things Come to Those Who Wait

Goaltender Cole Kehler is scheduled to make his first AHL start this evening. Kehler signed with the Moose during training camp and has been the backup for __ games this season. The Altona, Man. product has seen action in the Moose crease appearing in two games while posting a 1.94 goals-against average and a .882 save percentage in 61:42 of work. Kehler claimed the win in both of those contests, earning the rare feat of holding a 2-0-0 record despite having not started a game. Kehler earned his first career win while making eight saves on 10 shots over 40 minutes against the Senators on April 8. His previous action came on May 6 in Toronto when he stopped all seven shots faced in 21:42 of action.

Nathan Todd continues to check off milestones at the end of the season. Manitoba’s leading scorer recorded his 20th assist of the campaign. Todd is the only player on the Moose to reach double-digits in both goals and assists so far this season. He is tied for 13th in the AH with 31 points (11G, 20A) in 34 games.