Fast Facts: Moose at Belleville – May 16 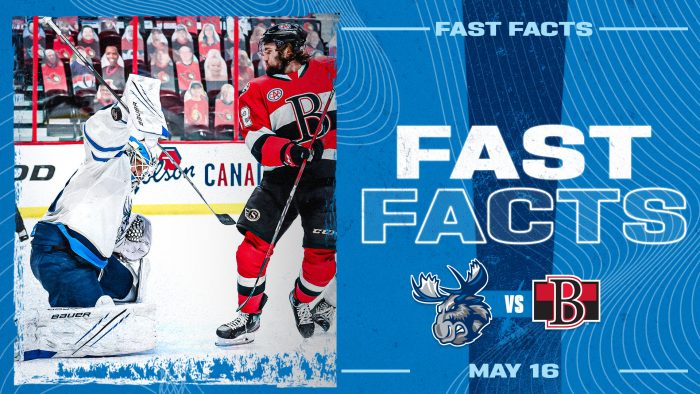 And so we come to game 36 of 36. The Manitoba Moose close out the 2020-21 season tonight in Ottawa against the Belleville Senators. Listen to this afternoon’s season finale on 680 CJOB, cjob.com/sports and MooseHockey.com/LISTENLIVE or watch with a subscription to AHLTV. Puck drop is slated for 3 p.m. CT.

Tonight’s game marks the end of the unique 2020-21 AHL season for the Manitoba Moose. The campaign featured oddities like a 36-game schedule, a 17-game home stand and multiple breaks of at least 10 days between games. The club comes into tonight’s matchup with the Senators featuring a 18-12-3-2 record overall, good for second in the Canadian Division. The Moose were 11-7-2-1 on home ice this season, and have a 7-5-1-1 mark on the road heading into tonight. Manitoba ranks in the top-half of the league on the power play (19.2% – 11th) and penalty kill (81.7% – 14th). The team features 11 players with at least 10 points this season and three players with 20 or more.

Manitoba’s best stretch this season came from April 8 – May 14 during which the team recorded points in a league-high 13 consecutive games with a 10-0-1-2 record. During that run, the team posted two five-game winning streaks. The Moose also recorded the first goal of the game in 12 of the 13 outings. In addition to being the AHL’s longest point streak this season, the mark is tied with two other editions of the Moose for the second-longest streak in franchise history.

Barring a record-setting night from one of his teammates, Nathan Todd will finish the season as Manitoba’s leading scorer. The Ottawa product comes into the final game of the season with a team-best 32 points (12G, 20A). He leads the club in assists (20), primary assists (14), even-strength points (20) and is second on the club with 12 power play points (5G, 7A). He’s the only Moose player this season to record at least 10 goals and 10 assists. Todd comes into the final game of the season tied for 11th in league scoring. Prior to this season, the 25-year old had one goal in 27 career AHL games.

Defenceman Leon Gawanke is set to join forward Cole Perfetti at the 2021 IIHF World Championship in Riga, Latvia this week. Gawanke will partake in the tournament as a member of Team Germany. Gawanke recorded seven points (1G, 6A) in 26 games with the Moose this season. The Berdlin, Ger. product played for his country at the U16, U18 and U20 and senior levels. The second-year pro made his debut with the top-level club at the Deutschland Cup this season where he posted two assists in three games.

Clap for The Birdman

Mikhail Berdin is scheduled to make his 30th start of the season this afternoon. The Moose netminder ranks second among AHL netminders in appearances. The Ufa, Russia product played 79.9 per cent of all minutes logged by Moose netminders this season while posting a 13-10-4 record alongside a 2.78 goals-against average and a .901 save percentage. Today’s game is Berdin’s 95th appearance in antlers which already ranks seventh in franchise history. He enters the contest with 45 victories, tied for seventh with Fred Brathwaite on the team’s list.

David Gustafsson scored Manitoba’s first goal last night, cashing in on a breakaway. Gustafsson’s seventh tally of the season marked his 19th point in just 21 games. With 0.90 points per game, the centreman ranks second on the Moose among players with over 10 games.