FAST FACTS: Moose at Toronto – May 6 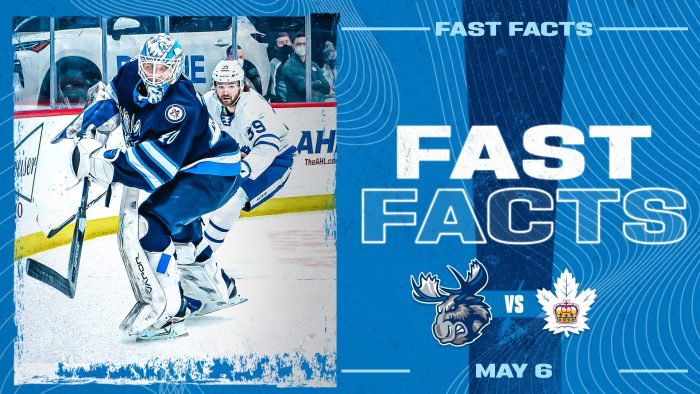 After finishing their 17-game home stand with points in eight straight games (7-0-0-1), the Moose hit the road to finish the season. The trip opens with a matchup against the Toronto Marlies this afternoon. The teams haven’t faced off since March 3. Listen to the contest on cjob.com/sports and MooseHockey.com/LISTENLIVE or watch with a subscription to AHLTV.

The AHL announced on Monday, May 3/21, Moose forward Cole Perfetti was named the CCM/AHL Rookie of the Month for April. Perfetti tied for the lead among AHL rookies, and the Moose, in scoring in April. He recorded 13 points (4G, 9A) in just nine games. Perfetti’s 13 points also left him in a tie for seventh among the league’s top point-getters for the month. His plus-eight rating tied for the lead among rookies and was tied for ninth overall. The Whitby, Ont. product recorded eight of his nine helpers as the primary assist this month. Perfetti also tallied nine points (2G, 7A) at even strength in April. The Winnipeg Jets’ 10th overall pick in the 2020 NHL Draft saved his best for when the game was on the line during the month, posting three of his goals in the third period and six of his 13 points in the third frame or overtime.

On the Road Again

This afternoon the Moose will appear in their first road game since Saturday, March 6 against the Belleville Senators. The Moose just completed a 17-game home stand where they posted a 9-5-2-1 record and have collected a point in eight straight outings, earning 15 of a possible 16 points. Manitoba has posted a 4-4-0-0 record on the road this season. Nathan Todd paces the Moose with 10 points (3G, 7A) during the club’s eight contests in opponents arena’s.

David Gustafsson scored Manitoba’s overtime game-winning goal against Stockton on Thursday, April 29. The centreman recorded his second game-winner of the campaign, tying him for the lead on Manitoba with three other players. The Moose are 4-3-0-0 during extra time this season. Three of Manitoba’s victories have come during overtime with Ville Heinola and Jeff Malott scoring the other game-winning goals for the Moose. The final victory came during a shootout, March 25 against the Laval Rocket.

Bobby Lynch recorded his first career AHL multi-point contest, April 29 against the Stockton Heat. The forward opened the scoring for the Moose during the second period and also tallied an assist on David’s Gustafsson’s game-winning goal during extra time. During the 2019-20 season with the Jacksonville Icemen, the forward racked up six multi-point games.

Johnathan Kovacevic recorded two assists during Manitoba’s 2-1 overtime victory against the Heat on Thursday, April 29. Kovacevic marked his second multi-point contest in as many nights and his fourth in eight games. Kovacevic had a dominant month and was tied for second on the Moose with eight assists and nine points.