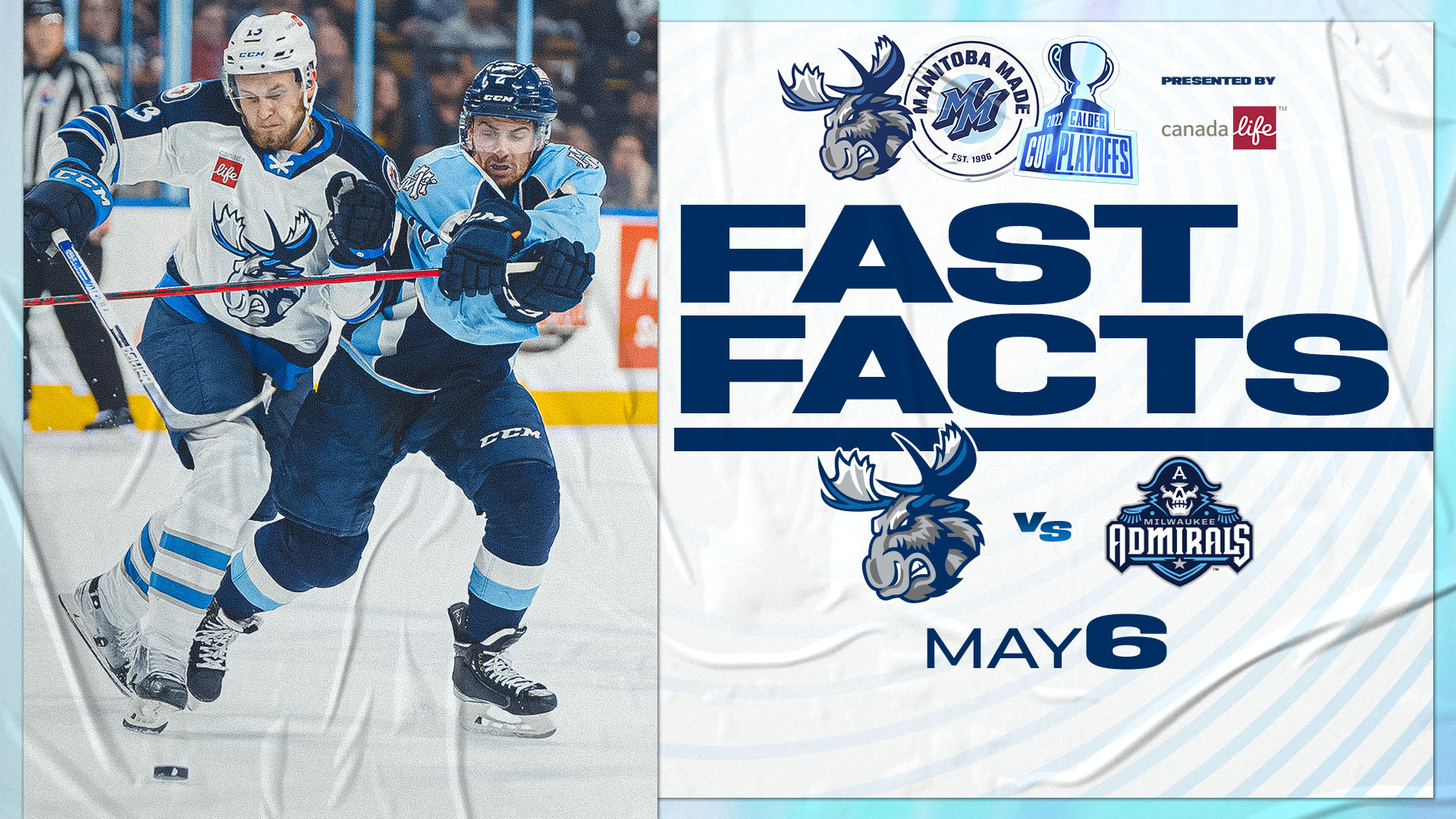 The Calder Cup Playoffs are finally here with the Manitoba Moose and Milwaukee Admirals ready to do battle in the Central Division Semifinals. The Moose claimed the regular season series by a 7-4-1-0 mark in 12 meetings this season. Manitoba picked up wins in four of six games in Milwaukee this season. It’s just the second time the teams meet in the playoffs, with their previous clash coming back in 1999 in the IHL. Coverage of tonight’s 7 p.m. CT matchup on 680 CJOB, AHLTV and the Manitoba Moose App gets going at 6:30 p.m. CT.

Tickets for Game 3 and, if necessary, Games 4 and 5 at Canada Life Centre are available at MooseHockey.com/TICKETS.

Manitoba’s focus shifts over to the playoffs, where the Moose face the Milwaukee Admirals. In terms of AHL playoff experience, the squad can rely on Luke Johnson to set the tone. The forward played in 13 contests in 2018 with Rockford and recorded eight points (4G, 4A) and one game-winner in that span.  Evan Polei can call upon 10 games with Bakersfield in 2019 and also has a playoff game-winner under his belt. Jimmy Oligny and C.J. Suess each claim three games of their own with Milwaukee and Manitoba respectively. Rounding out the group are Mikey Eyssimont and Markus Phillips, who both suited up in the 2021 Pacific Division playoffs with Ontario.

Bird is the Word

Mikhail Berdin put together a pair of strong performances against Abbotsford to close our the regular season. The netminder gave up a single goal on Thursday, before blanking the Canucks on Saturday on the back of a 6-0 win. Berdin ended the regular season with a 19-10-2 record to go along with a 2.40 goals-against average and a .902 save percentage. He also set a new career high mark with four shutouts on the campaign, which placed the goaltender in a tie for third overall in the entire AHL. Berdin’s 32 games played was the second-most of his career to date, with his 75 goals against being the second lowest he’s allowed over his AHL career with Manitoba.

The Winnipeg Jets sent the Moose a pair of reinforcements ahead of the Calder Cup playoffs. Defenceman Dylan Samberg suited up in 15 games for Winnipeg and recorded five assists over that span. The Hermantown, Minn. product skated in 32 games for the Moose this season and registered 12 assists. Morgan Barron made his way to Winnipeg from the New York Rangers as part of the Andrew Copp trade. The forward skated in 14 games for the Jets this season and recorded four points (2G, 2A) in that time. He registered multi-point NHL games against both Montreal and Seattle this season. Barron skated in five games with the Moose and tallied two points (1G, 1A).

Saving the Best for Last

Mikey Eyssimont recorded a hat-trick in Saturday’s regular season finale. It was the first Moose hat-trick since Seth Griffith’s trio on Dec. 21/19. The forward scored a goal in each period of the game, with his third and final marker giving him the most points on the Moose this season. Eyssimont tallied 42 points (18G, 24A) in 58 games and led the Moose with 205 shots. The Littleton, Col. product also placed second on the squad with a rating of plus-15. Eyssimont led the antlered ones with four insurance goals over the campaign.

Player of the Week

Nicholas Jones recorded three points (1G, 2A) in Manitoba’s win against Abbotsford on Saturday afternoon. The forward is riding a three-game point streak that has seen him record six points (2G, 4A) over that span. Jones racked up five points (2G, 3A) in the final two games of the season, earning AHL Player of the Week honours.