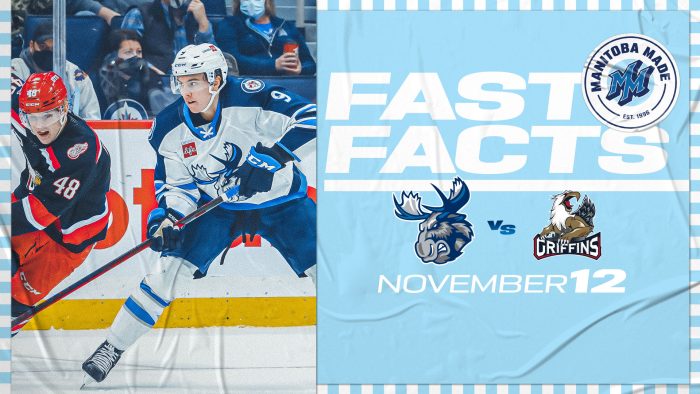 The Moose hit the final weekend of their lengthy six-game road swing this evening in Grand Rapids. Manitoba swept a pair of games against the Griffins back in Winnipeg last month. The Moose come into tonight’s game following a 4-3 overtime win in Milwaukee on Wednesday. Coverage of tonight’s game on CJOB.com/sports, MooseHockey.com/LISTENLIVE and AHLTV.com gets rolling at 5:45 p.m. CT.

The Moose racked up an incredible 60 shots on goal in 64:22 of play-time Wednesday night in Milwaukee. Manitoba recorded 56 shots during regulation and added the final four in overtime, winning the game on their 60th shot. The goal came courtesy of Leon Gawanke’s wrister, which also set a franchise record as Gawanke’s 11th shot of the game. A total of six Moose skaters recorded five or more shots in the win and 16 of 18 skaters recorded a shot on goal. The mark set a new franchise record for the Moose. The team’s previous high of 52 came all the way back on Dec. 29/00 against Kansas City. The previous 60-shot game recorded in the AHL actually came last season when the Laval Rocket posted 60 shots in a 4-3 overtime loss to Toronto on May 4/21.

The Moose power play broke out in a big way on Wednesday. In Manitoba’s first 10 games, the club hadn’t recorded multiple power play goals in a contest. On Wednesday the Moose scored all four of their goals on the man advantage. Manitoba went 4/6 on the power play. The outburst nearly doubled Manitoba’s season goal total by jumping from five to nine power play goals on the season. The franchise record for power play goals scored in a single game is five, scored against the Portland Pirates back on Jan. 31/14 when the team was based out of St. John’s as the IceCaps.

Leon Gawanke had one of the biggest games of his AHL career on Wednesday. The Moose defender scored twice, added an assist and notched 11 shots on goal in the victory. Gawanke’s 11 shots on goal set a new franchise record for the Moose. The Berlin, GER. product scored the game-tying and game-winning goals, both on the power play. It was Gawanke’s first AHL multi-goal game and second overtime winner. His previous OT goal came on Feb. 29/20 against the Chicago Wolves. With the pair of goals, Gawanke jumped into a tie with Johnathan Kovacevic for the lead among Moose defenders. Gawanke was a fifth round pick, 136th overall, in the 2017 NHL draft.

The Moose are into the final two games of a six-game road swing. Manitoba comes into the weekend with a 2-1-1-0 mark on the trip. The Moose are 3-3-1-0 on the road so far this season. Defenceman Ville Heinola leads the Moose with nine points (1G, 8A) in seven road games this season, accounting for all his points this season. Forwards David Gustafsson (2G, 4A) and Jeff Malott (2G, 3A) follow Heinola with six points and five points respectively. Like Heinola, Malott has all of his points on the road this season.

Jeff Malott scored his second goal of the season on Wednesday in Milwaukee. The tally gives Malott goals in back-to-back games. Malott ranks __ on the Moose with __ shots on goal. The Burlinton, Ont. product led the Moose with 14 goals and finished tied second among rookies during the 2020-21 season.